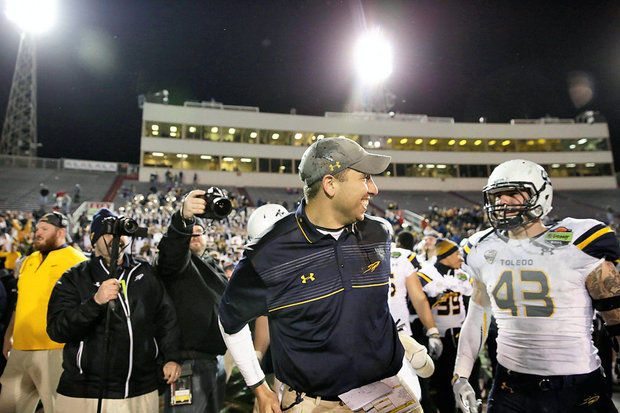 Northern Illinois has won five consecutive MAC titles and looks to win its fourth straight game after suffering three consecutive defeats earlier in the season. The Huskies’ 5-3 record this season is grossly misleading in that two of those losses came on the road against Ohio State and Boston College.

And, the Huskies covered the point spread in both games, losing to Ohio State 20-13 as 34-point underdogs and falling to Boston College 17-14 as 3.5-point underdogs. Entering 2015, Northern Illinois was one of only two teams in the nation to post five consecutive 11-win seasons (Oregon being the second).

Northern Illinois once again possesses one of the conferences best stop units, allowing 24.5 points and 369 total yards per game at 4.7 yards per play to teams that would combine to average 5.4 yards per play. The Huskies boast an experienced front seven that is limiting opposing running backs to just 3.5 yards per rush attempt (0.7 yards per carry better than average).

The Huskies’ stop unit has really played well on the road where they are limiting teams to 19.5 points and 302 total yards per game at 5.2 yards per pass attempt and 4.3 yards per play. Opposing quarterbacks are completing just 49.1% of their pass attempts against Northern Illinois’ secondary so Alabama transfer Phillip Ely will have his work cut out for him tonight in what is a pivotal MAC showdown. Ely has been a disappointment this season, completing 55.3% of his pass attempts (136-for-246) for 1,734 yards at 7.0 yards per pass attempt.

The Rockets’ ground attack has been 0.5 yards per rush attempt better than average this season, which comes as a surprise in light of the fact that their offensive line lost 162 career starts and only returned three. Credit falls squarely on the shoulders of offensive line coach Tom Manning, who has fashioned a formidable unit from an inexperience lot of college kids.

Northern Illinois’ offense is led by quarterback Drew Hare, who threw for 2,322 yards (59.5%; 18-2) last season and was the team’s second-leading rusher with 900 yards at 5.7 yards per carry. Hare is the team’s best pocket passer and has completed 64.3% of his pass attempts this season for 1,817 yards at 7.4 yards per pass play (13-3). The Huskies’ offense, which is mediocre from the line of scrimmage (5.8 yards per play against teams that would combine to allow 5.9 yards per play), has looked outstanding over the last three weeks.

Specifically, Northern Illinois is averaging 51.0 points and 580 total yards at 6.9 yards per play and 11.4 yards per point over its last three games, with Hare completing 72.9% of his pass attempts at 8.7 yards per pass play. The Huskies also boast the MAC’s best rushing offense led by junior tailback Joel Bouagnon, who averages a league-best 107.8 yards and is tied for third in the country with fourteen rushing touchdowns. Northern Illinois is second in the nation in scoring touchdowns on drives of two minutes or less. Of the Huskies’ 37 touchdown drives this season, 24 have been in two minutes or less for a 64.8% rate.

Both teams enter off a bye, but the Rockets are a money-burning 1-9 ATS in their last ten games with extra rest and 1-6-1 ATS in their last eight home games versus .501 or greater opposition. The underdog is 9-4 ATS in this series, while the road team has covered the point spread in each of the last four meetings.

I also believe Northern Illinois has the superior place kicker in Christian Hagen, who is 8-of-11 with a long of 48 yards this season. Meanwhile, Toledo lost its best place kicker in Jeremiah Detmer, who graduated with the MAC record for highest percentage of field goals in a career (84.9%). He also had 37 touchbacks on 86 kick-offs so Detmers’ leg has been missed this season. Freshman kicker Jameson Vest has done well to date, but he is nowhere near as talented as Detmer. I like Northern Illinois plus the points.