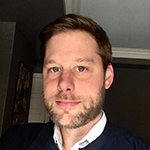 Sean Murphy’s handicapping success is renowned, and his winning advice has been featured on TV and radio shows across North America.

Sean Murphy made his professional debut as lead handicapper for Pat Miller Sports in 2003, continuing on with The Miller Group from 2006 through 2009. Sean broke away to found his own sports service in September 2009 and has now delivered 12 of 17 winning NFL seasons. Sean’s also cashed big in NCAA Football, as he’s won each of the last 3 seasons, recording 55% of his overall bets. A key factor in Sean’s success is his knack for Over/Unders, which is no surprise given Sean’s reputation as a ‘numbers guru.’ Indeed, Sean’s knack for handling numbers is deep-rooted. He owns a business degree, with a major in finance, and is a member of the prestigious Beta Gamma Sigma honor society for business students and scholars.

Although Sean took a circuitous route to become a professional handicapper, sports betting has been a part of his life for as long as he can remember. In fact, he still fondly recalls his first successful venture into sports betting – a winning three-game NFL ‘Pro-Line’ parlay (offered by the Canadian lottery) when he was just 12 years old. Sean — along with the rest of his 7th-grade class — was hooked. His passion for sports is unmatched. The phrase “find something you love to do and you’ll never ‘work’ a day in your life” is Murph’s mantra. Sean’s love for numbers, combined with his passion for sports, makes a career in sports handicapping the perfect fit.

After building The Miller Group from the ground up, and turning it into one of America’s most respected handicapping services, Sean has continued to prosper as an independent, thanks to an honest approach and strong belief in delivering value to the customer. Sean’s selections are based on his extensive knowledge of the game, and his approach is both situational and statistical. He prides himself on going against the majority and thinking outside the box, and his unique analysis keeps his clients coming back. When you purchase one of Sean’s selections, you can always count on insightful and expert information to back it up. Sean rates all of his plays from 8* to 10* with free plays qualifying as 8* releases, and the majority of his selections warranting a 10* designation. As you would expect, the higher the rating, the stronger the play.