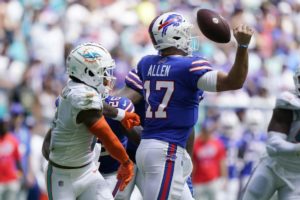 A number of NFL teams put in some in-season preparation for a stretch run toward the playoffs and, ultimately, the Super Bowl with some roster moves before the league’s trade deadline on Nov. 1. The moves had some effect on the Super Bowl futures odds. Here’s a look at the futures market after the NFL trade deadline.

Best of the Best

Buffalo has been the Super Bowl LVII betting favorite since the market opened. The Bills are listed at +230 and added RB Nyheim Hines to the mix. Buffalo strengthened the running back position by trading with the Colts to acquire Hines, who has averaged 4.0 yards a carry over his five-year NFL career.

Philadelphia (+550) and Kansas City (+700) have both been tearing it up and didn’t need to make any major moves. The Eagles remain the NFL’s lone unbeaten and the Chiefs have the top-scoring offense in the league despite losing Tyreek Hill in the offseason.

The San Francisco 49ers (+1300) made a major move before the deadline when they traded for former Carolina RB Christian McCaffrey. Just last week, McCaffrey became just the 11th player in NFL history to record a touchdown run, pass, and reception all in the same game. The Niners have a top-10 defense and now have enough skill players on offense to be dangerous.

Minnesota sits atop the NFC North at 6-1. They traded in the division with Detroit to get a missing piece – TE T.J. Hockenson. That will help bolster a Vikings offense that averages 24.7 points per game. The Vikings continue to hold a three-game lead over Green Bay (3-5) in the division.

Baltimore (+1400) typically does it with defense and they added All-Pro LB Roquan Smith in a trade with Chicago. The Ravens are 5-3 and lead the NFC North. They will need all the help they can get as the road to Super Bowl LVII appears to be headed through Buffalo or Kansas City.

The Miami Dolphins have done a great job of building a roster that can compete for championships. In the offseason, they went out and acquired Hill from Kansas City giving QB Tua Tagovailoa a legitimate deep threat.

Miami, which is given +2800 odds to win the Super Bowl, is 5-3 so far and, being in the same division as the Bills, is likely headed to the playoffs as a wild card. In an effort to improve their chances at not only making the postseason but winning a Lombardi Trophy, the Dolphins went out at the trade deadline to build up the defense. The Dolphins are a top-10 defense in terms of total yards per game. What they added was a quality pass rusher in former Broncos DE Bradley Chubb.

Interestingly, the Cleveland Browns (3-5) did not make any moves at the deadline. Despite their record, Cleveland ranks No. 9 in DVOA according to Football Outsiders. In a month, the Browns will get QB Deshaun Watson back and they will still have one of the top rushing attacks in the league with RBs Nick Chubb and Kareem Hunt. It was Hunt that was mentioned in several trade rumors, but he’ll stay in Cleveland for the time being.  The Browns are given +7000 odds to win Super Bowl LVII.