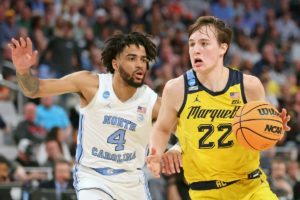 The start of the 2022–23 college basketball season is not far off. It was only six months ago that Kansas put together the biggest comeback in NCAA championship history and beat North Carolina 72-69 to win the title.

The March Madness 2023 futures market is beginning to take shape as the new season draws near. Gonzaga is the overall betting favorite to win the national championship this year. It’s almost like deja vu all over again. The Bulldogs have been among the betting favorites at the beginning of the last several seasons.

The list of contenders should look familiar, despite the inclusion of a few interesting names. Here are the leading candidates for this year’s NCAA basketball national championship, along with a couple of longshot values.

Will Gonzaga finally win a national title this year? The Bulldogs’ two appearances in the national championship game ended in losses to North Carolina in 2017 and Baylor in 2021. The Bulldogs have also made it to the Sweet 16 twice and the Elite Eight once over the previous six seasons. Without a doubt, Gonzaga is one of the top programs in the country under head coach Mark Few.

The Bulldogs have never won a national title, but this could be the year. Few has retained a large portion of the team’s talent from last year, including Drew Timme, Rasir Bolton, and Julian Strawther. Gonzaga adds 6-foot-4-inch transfer Malachi Smith who averaged 19.9 points, 6.7 rebounds, and 3.0 assists last season at UT-Chattanooga.

As a No. 5 seed in the NCAA tournament last year, the Houston Cougars stunned the nation by annihilating their opponents before falling to Villanova in the Elite Eight. They did this despite the fact that two of their best players, Traon Mark and Marcus Sasser, were sidelined for the season due to injuries. Keep in mind that the Cougars reached the Final Four in 2021.

The Cougars added five-star recruit Jarace Walker to the club this season to play alongside Sasser and Mark who are now both healthy. Houston should win the AAC once more, and it won’t come as a surprise if they receive a No. 1 or No. 2 seed in the 2023 NCAA Tournament.

The Tar Heels, a No. 8 seed in the tournament last year, led Kansas by 15 points at halftime in the championship game. Hubert Davis’ inaugural year as head coach at his alma mater wasn’t meant to be. Davis is fully equipped to return to the championship game immediately. For the Tar Heels, Armando Bacot, who led the team in scoring and rebounding, is back along with the other starters Leaky Black, Caleb Love, and R.J. Davis.

The majority of the Creighton roster from last year’s 23-12 team returns. In addition, Baylor Scheierman, the Summit League’s player of the year, joins the Bluejays. Three Creighton players were chosen for the Big East All-Freshman team prior to his arrival.

Remember that Creighton reached the Sweet 16 in the previous season before falling to Gonzaga 83-65. The Bluejays, who are listed at +2500, have all the ingredients for success in 2023.

Another longshot with potential is Indiana (+3500). Trayce Jackson-Davis’ choice to stay with the Hoosiers rather than join the NBA is the big reason why. Last season, Jackson-Davis averaged 18.8 points and 8.1 rebounds per game. Race Thompson is back as well, and the Hoosiers have added Malik Reneau and five-star recruit Jalen Hood-Schifino.