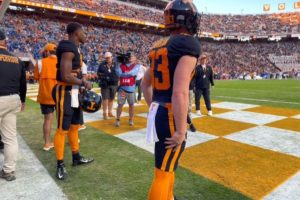 The first edition of the College Football Playoff rankings were released Tuesday night and there really aren’t any surprises, though there are some really angry fans in the Fort Worth-Dallas area right now. One thing is certain. No one, including the teams involved, will care about the Nov. 1 rankings once the final CFP semifinals are announced on Sunday, Dec. 4.

That said, here’s a look at who’s happy and who’s not with the release of the first 2022 CFP rankings.

The CFP committee got it right at No. 1. Tennessee has the best resume with the best win – over Alabama – and is deserving of the top spot in the rankings. The Vols also wins over a No. 17 Pitt, No. 20 Florida, and No. 25 LSU. Last week, Tennessee pounded No. 19 Kentucky 44-6.

It can all come crashing down this week when the Vols play at No. 3 Georgia. But, Tennessee still has a path to the CFP with a loss. More on that later.

After Tennessee, 8-0 Ohio State checks in at No. 2. The Buckeyes beat then-No. 5 Notre Dame in their season opener then destroyed everyone else on their schedule, including No. 13 Penn State 44-31 last week.

Georgia, as mentioned, is No. 3. The Bulldogs have little room for error. Yes, they have a win over No. 8 Oregon, but minus the Ducks, the rest of Georgia’s opponents have a collective 22-26 record. If Georgia loses Saturday and fails to make the SEC title game, there is little chance the Bulldogs will defend their national championship.

In the fourth spot is 8-0 Clemson. The Tigers have three wins – Wake Forest, NC State, and Syracuse – over ranked opponents. The rest of the schedule features no ranked opponents, but some tough opponents in Notre Dame and in-state rival South Carolina.

Despite being unbeaten at 8-0, the Wolverines were left out of the top-4 and come in at No. 5. There is one big reason why – Michigan’s nonconference schedule. Beating Colorado State, Hawaii, and UConn isn’t going to get anyone into the top-4 at this time.

Michigan’s biggest win is over Penn State, now No. 15. The Wolverines will play No. 16 Illinois later this month, but there is no question what Michigan must do. They must win out and beat No. 2 Ohio State for the second consecutive season.

One would think an unbeaten 8-0 TCU would have been ranked No. 6 right behind Michigan. Some might have even though the Frogs could crack the top-4. No, a 7-1 Alabama was given the sixth spot and TCU came in at No. 7 in the first CFP poll.

To say that the fans in purple are angry…that’s an understatement. TCU can argue a better resume than the Crimson Tide. The Horned Frogs have dominated their competition, which includes wins over four straight ranked opponents.

It is entirely likely that Oregon and USC will end up playing for the Pac-12 championship. The winner would need a lot of help. An unbeaten TCU would present a problem as would a one-loss Tennessee that doesn’t win the SEC. A loss by either Clemson or Alabama would help the Pac-12 but for now, the Left Coast is out of the picture.

Since the beginning of the CFP, the No. 3 spot has been a curse. Only one team ranked No. 3 in the initial CFP rankings has ever made it into the playoff. That was Clemson in 2020. Can Georgia fight off the curse?

A win over Tennessee this week would be huge. A loss by the Vols wouldn’t necessarily eliminate Tennessee. Georgia still has games with Kentucky and Mississippi State, both of which were ranked at some point this season. The Vols could still win the East and win the SEC. That would guarantee a berth in the CFP.

Tennessee could also win out and face an Alabama team that does the same in the SEC championship game. The Vols lose the SEC title game but could get into the CFP with one loss. There’s still a lot of football left and, as mentioned, no one will care about these Nov. 1 rankings a month from now.