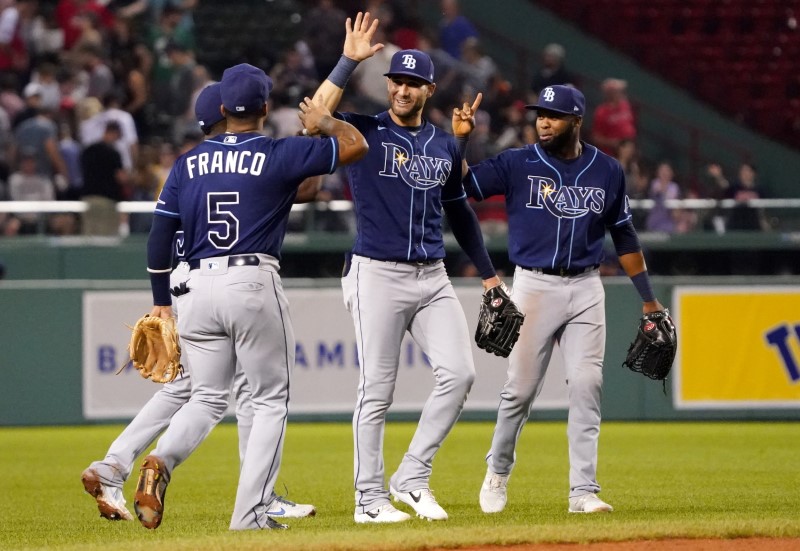 Tampa Bay just continues to do what it does best – win. The Rays have won the first two games of this series with Boston and look for another tonight. On Monday, Tampa Bay fell behind 7-0 after just two innings. The Rays then found a way to come back and win 11-10. Last night, it was more of the same as Tampa Bay won 12-7. Both games have been very “Fenway-esque” in terms of total runs. Fenway Park is one of the most hitter-friendly ballparks in the majors and it has shown with these two powerful offenses.

The Rays have won four of their last five games and have done so by scoring in double digits in three of them. They continue to lead MLB in runs per game (5.44) without a true superstar in the lineup. Yes, Wander Franco (.285) is a future star, but he has only played 60 games this season. Tampa Bay likely has the best lineup that no one has ever heard of. Randy Arozarena hits .276 with 19 homers and 62 RBI. Austin Meadows has 24 homers and 97 RBIs. Brandon Lowe (33) and C Mike Zunino (29) lead the team in home runs. None of these guys are household names.

They are, however, a lineup that will give opposing pitchers fits. Nathan Eovaldi gets to deal with the Rays tonight. He is 10-8 this season with a 3.68 ERA. Eovaldi has been pitching well recently. Although he was a no-decision in each of his last three starts, the Red Sox won each game. Eovaldi pitched a total 19.2 innings and gave up just five earned runs and struck out 23 batters.

He also pitched well the last time he faced Tampa Bay. Eovaldi pitched seven innings and allowed just three hits while striking out 10. Boston is 2-1 against the Rays in games Eovaldi has started this season. Boston’s lineup is no slouch either as they scored 20 runs against Tampa Bay in Eovaldi’s last start against the Rays. With that type of offensive production, it Eovaldi can hold his own Boston will be in the game going into the later innings.

Shane McClanahan will start for the Rays. He is 9-5 this season with a 3.67 ERA. The left-hander was on a roll with five straight wins until last Thursday when he faced these same Boston Red Sox. McClanahan gave up four earned runs in five innings and took the loss. It was the first start since June in which McClanahan gave up more than three earned runs.

McClanahan pitches better at home where he is 6-2, but the Rays are one of the best road teams in the majors. They are 43-25 so far this season away from home. Also, the Over trends when the Rays are on the road. In Tampa Bay away games, the Over is 42-24-2 this season. Tonight’s total is 9.5 and both games of this series have gone Over.