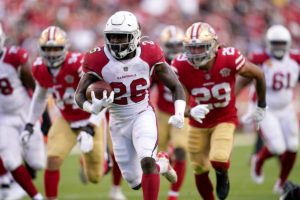 The Arizona Cardinals (4-6, 5-5) take on the San Francisco 49ers (5-4 SU, 4-5 ATS) at Estadio Azteca in Mexico City on Monday night in a pivotal divisional contest. The 49ers can tie the division-leading Seattle Seahawks, who are off this week if they can defeat the Cardinals in the first of their two meetings this season.

Arizona quarterback Kyler Murray missed the Cardinals’ surprising 27-17 victory over the Los Angeles Rams last week. For some, it was no surprise as the Rams played without their starting quarterback Matthew Stafford. Arizona wound up covering the spread as a result. Murray will not play tonight either as he rests his hamstring injury. According to Arizona head coach Kliff Kingsbury, Murray was unable to get through a full practice this week. Cardinals backup Colt McCoy, who started last week, will start again. He is 3-1 as a starter with Arizona.

The San Francisco offense seems to be fully healthy at this point. After returning from their bye week, the 49ers showed some signs of their potential in a 22-16 win over the Los Angeles Chargers on Sunday night. Running back Elijah Mitchell finished with more carries than recently acquired Christian McCaffrey and finished with 18 carries for 89 yards. Deebo Samuel is also back and WR Brandon Aiyuk has been QB Jimmy Garoppolo’s guy as of late. He has 27 catches and three touchdowns over the last three games.

The Cardinals have a number of injury issues. In addition to Murray, tight end Zach Ertz is out with a knee injury. Ertz led the club in receptions with 47 for 406 yards and four touchdowns. He will miss the rest of the season.

Due to Ertz’s injury, Arizona WR DeAndre Hopkins will be under even more pressure. On a team-high 14 targets against the Rams, he hauled in 10 passes for 98 yards. Teammate Rondale Moore added nine receptions for 94 yards on 13 targets.

The defense will likely decide whether San Francisco wins and covers the spread. The Chargers took an early lead against the 49ers last week, but San Francisco was able to come back and win. The Niners did not cover the spread as 8-point favorites.

The Niners have covered the spread in 13 of their previous 20 games and are 4-2 SU in their last six contests. Against Arizona, they have not had that kind of success. In its last 14 games against the Cardinals, San Francisco is 3-11 SU and they are 1-7-1 ATS in the last nine.

In their past 16 games overall, the Cardinals are 5-11 SU. Despite the game being played in Mexico, Arizona will be the home team. The Cardinals are just 1-9 SU in their last 10 games at home. Arizona won both games against the 49ers last season and covered the spread in both.

San Francisco leads the NFL in run defense (86.6 ypg) and ranks sixth in scoring defense allowing 18.4 points per game. Six of their nine games this season have gone Under the total.