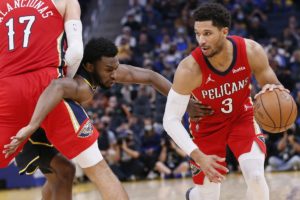 Is the real Klay Thompson back? Thompson hit 10-of-13 three-point attempts last night as Golden State picked up its first road victory of the 2022-23 NBA season. The Warriors beat the Houston Rockets 127-120 behind 41 points from Thompson. Stephen Curry added 33 points to go with his 15 assists and Andrew Wiggins finished the night with 22 points.

It was a great overall effort from the NBA’s defending champions. Golden State made a total of 24 three-pointers and shot 51.1 percent from behind the arc. The big question for Golden State and head coach Steve Kerr is whether or not his team can maintain success on the road this season. They will get a chance to find out tonight in New Orleans.

Zion Williamson could be back for tonight’s game with the Warriors. He is listed as questionable but is expected to play after returning from an ankle injury. The Pelicans recently had a three-game winning streak stopped by Boston at the Smoothie King Center on Friday. New Orleans lost 117-109 and enjoyed the weekend off.

The Pelicans are optimistic heading into tonight as they welcome the Warriors to their arena once again this season. New Orleans beat Golden State 114-105 back on November 4 at the Smoothie King Center. Brandon Ingram led the Pelicans with 26 points. C.J. McCollum had 20 and Williams added 16. Golden State played without Curry, Thompson, and Wiggins.

Despite two straight wins, Golden State is a 5.5-point underdog going into this game. Part of the reason why is that they are playing the second of a back-to-back tonight. Fatigue could be a factor. However, Golden State is playing extremely well despite this being their fourth game in five days. Over their previous four games (in which they are 3-1), Golden State is averaging 122.3 points per game. For the season, the Warriors are fourth in the NBA in scoring averaging 117.1 per game. Plus, the Warriors have had previous success against the Pelicans with 11 wins in the last 16 head-to-head meetings.