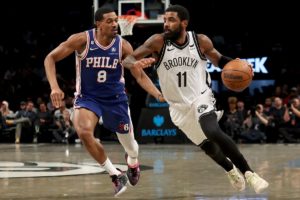 Ben Simmons, who recently had his best performance for the Brooklyn Nets since being traded from the 76ers, feels confident going into his return to Philadelphia tonight. The Nets have won two straight and Simmons is wondering how he will be received when he steps on the floor at the Wells Fargo Center tonight.

Simmons averaged 15.9 points per game in 275 regular season games for the Sixers. He made his final appearance for Philadelphia in Game 7 of the Eastern Conference semifinals at the end of the 2020-21 season. Sixers fans might not even show up for tonight’s game as many of their top players will be on the bench.

Leading scorer Joel Embiid is out for at least two games after suffering a mid-foot sprain in his left foot on Saturday. The Sixers already lost Tyrese Maxey on Friday due to a broken left foot. Star guard James Harden was already out with a strained right foot and he’ll miss another two weeks before returning.

Embiid hurt his foot on Saturday after colliding with teammate Georges Niang in the second half of a 112-109 loss to the visiting Minnesota Timberwolves. Furkan Korkmaz (knee) and Tobias Harris (sore left hip) missed the game on Saturday, and defensive specialist P.J. Tucker—who frequently covers Brooklyn star Kevin Durant—left that game with an undisclosed injury.

In his first 12 games with the Nets, Simmons has averaged 7.9 points. When Harden requested a trade last season, the Nets acquired Simmons from Philadelphia before the trade deadline along with Seth Curry. Simmons sat on the sidelines back on March 10 of last season when the Nets played in Philadelphia. He was out of the Nets lineup with a back issue.

In his first nine games, Simmons averaged just 5.2 points, but over his last three contests, he has averaged 16 points, 8.7 rebounds, and five assists while hitting 84.6 percent (22-of-26) of his shots.

He scored 22 points on 11-of-13 shooting and grabbed a team-high eight rebounds on Sunday as the Brooklyn Nets defeated the visiting Memphis Grizzlies 127-115 to earn their sixth victory in nine games. Simmons contributed to Brooklyn’s effective performance, which included a season-high 33 assists and a 60.2 percent shooting percentage.

Kevin Durant finished with 26 points, making it 17 straight games with at least 25 points, while Kyrie Irving finished with 14 points in 26 minutes after serving an eight-game suspension imposed by the team. In addition to being 6-3 SU in their last nine games, the Nets have covered the spread in seven of the nine.