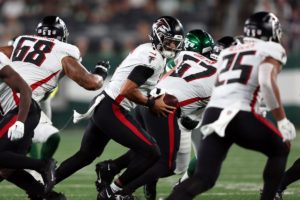 The Panthers and Falcons will face off once more tonight in Charlotte, North Carolina, two weeks after their 37-34 shootout in Atlanta. The Falcons (4-5) blew a lead and lost 20-17 to the Los Angeles Chargers at home on last Sunday. They are now losing ground in the NFC South. Atlanta and Tampa Bay are now tied for first place in the division. That makes this divisional game tonight even more crucial.

In the first meeting between the Panthers and Falcons, the Panthers missed two field goal tries that could have given them the victory, but Atlanta prevailed 37-34 in overtime. With the short week, there wasn’t a lot of prep time for either team, but both are pretty familiar with each other.

Falcons head coach Arthur Smith indicated that he will adjust his game plan from two weeks ago and is confident that Carolina will do the same. The Panthers must deal with more than their game plan. Steve Wilks is the interim head coach after Matt Rhule was fired earlier this season. P.J. Walker, the team’s starting quarterback, was benched by Wilks last week, and Baker Mayfield took his place. Walker will remain the starter for tonight. The quarterback issue could be a problem for the Panthers.

Last week, Mayfield replaced Walker after Carolina fell behind by 35 points at the half. Walker completed 3-of-10 passes for nine yards in the half. He also threw two interceptions and ended up with a 0.0 QB rating. That was enough to bring on Mayfield for the second half. Signed in the offseason to be the Panthers’ starter, Mayfield completed 14-of-20 pass attempts for 155 yards and two touchdowns.

What might be more important than the Panthers’ quarterback play is their run defense. Carolina was completely hammered by the Bengals ground game in last week’s loss to Cincinnati. Cincy gained 241 yards on the ground while averaging 6.2 yards per run and scoring five touchdowns. Cincinnati RB Joe Mixon had 22 carries for 153 yards and four touchdowns.

Cordarrelle Patterson, who didn’t play for the Falcons in the Week 8 game against Carolina, will be available for Atlanta on Thursday. After fully recovering from a knee injury, Patterson could have a big night against Carolina. He averages 5.4 yards per carry this season.

It has been distressing to watch Atlanta’s passing game struggle so much. Tight end Kyle Pitts hasn’t drawn much notice, while rookie Drake London has cooled off after a blazing start. Pitts has recorded five or more receptions versus Carolina in two of his career games, and two weeks ago, he scored a touchdown against the Panthers.

Carolina’s quarterback issue just won’t seem to go away. Walker, who recorded a career-high 317 yards against Atlanta in Week 8, will make his sixth straight start. Sam Darnold, who was reinstated to the 53-man roster this week, is also an option.

Atlanta has won eight of the last ten games against Carolina. The Falcons are 7-3 ATS in those ten games.