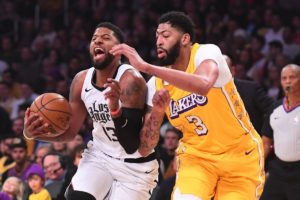 Recently, the Los Angeles Clippers have owned their city rival, the Los Angeles Lakers. The Clippers will enter Wednesday’s second season encounter with the Lakers riding an eight-game winning streak over their rivals. After defeating the host Lakers 103-97 in the season opener, the Clippers are the home team this time.

The Clippers also come into this game off their biggest win of the year, a comeback win over the Cleveland Cavaliers on Monday that saw them overcome a 13-point fourth-quarter deficit and use a late 15-0 run to win 119-117. The win snapped an eight-game Cleveland winning streak.

Due to ongoing knee problems, Clippers star Kawhi Leonard has missed the last eight games. As a result, Paul George has taken on an increased load. On Monday night, George scored 26 points, including a crucial three-point play in the waning seconds that put the Clippers ahead.

Clippers forward Terance Mann has stepped up recently, recording his first two games with double figures this season. On Monday, Mann scored a season-high 16 points on 6-of-9 shooting. He will be one of the keys tonight as the Clippers try to keep their streak against the Lakers alive. The Clips have not lost to the Lakers since July 30, 2020. The Lakers still own the advantage in the overall series at 150-82.

The Lakers lost to the Utah Jazz on the road 139–116 on Monday. LeBron James missed Monday’s game for the Lakers due to a painful left foot, but Anthony Davis scored 29 points in his absence. The Lakers were also without defensive-minded guard Patrick Beverley and guard Lonnie Walker IV due to illness. The Lakers allowed the Jazz to shoot 55.8% from the field.

The Lakers are now just 2-8 and head coach Darvin Ham is off to a rocky start in his first season at the helm. The Lakers dropped their first five contests before winning three straight. They promptly lost three straight again, including two to the Jazz. While the Lakers are playing in their own building, they are the road team tonight. They have not won a road game yet this season.

In nine games, including three starts, Russell Westbrook has averaged 16.3 points per game for the Lakers. On Monday, he scored 22 points off the bench. His points-per-game average hasn’t been this low since his second season with the Oklahoma City Thunder in 2009–10.