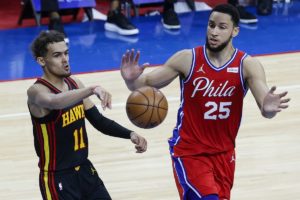 Eastern Conference rivals Philadelphia and Atlanta will face off for the first time this season tonight at State Farm Arena. Both teams’ two top stars should be back at full strength. After missing three games due to sickness, Joel Embiid of the Sixers made his comeback on Monday. After missing a game due to a lower leg ailment, Trae Young is back in the lineup for the Hawks. The first of two consecutive games between the two clubs will take place tonight. On Saturday, they’ll square off once more in Philadelphia.

Embiid did not display any signs of illness-related fatigue as Philadelphia defeated the Phoenix Suns 100-88 on Monday night. With 33 points and 10 rebounds, Embiid recorded his fourth double-double of the season. In 13 career games against Atlanta, Embiid has averaged 23.6 points and 9.5 rebounds per game.

Atlanta is optimistic Young will bounce back from his disastrous performance against Utah on Wednesday. In a 125-119 defeat to the Jazz on Wednesday, Young managed just 10-for-28 shooting from the field. Hawks head coach Nate McMillan believed that his star point guard was a touch off following his absence. While recovering from his injury, Young was unable to perform any running.

The Sixers are still without James Harden, who has a strained tendon in his right foot. Tyrese Maxey has stepped in as Harden’s replacement. Maxey averages 23.6 points and 4.0 assists per game. Maxey has had two games with at least 30 points, though he only scored 11 in the victory over Phoenix.

Tonight, Atlanta’s bench might play a role. On Wednesday, it was challenging for the Hawks’ backups to keep up with Utah. When Atlanta played Milwaukee on Monday, the bench outscored the Bucks 59-33. They were outscored 43-19 by Utah on Wednesday For the Sixers on Monday, Georges Niang came off the bench and scored a season-high 21 points, including seven 3-pointers.

This will be Atlanta’s second back-to-back of the year. In their first, the Hawks won the first game against Detroit but fell to Milwaukee in the second. Both games were on the road. In its previous six games, Philadelphia is 4-2 SU and ATS. In their last 20 home games, the Hawks have won 16 times.

In seven of the Hawks’ last nine games, the Over has prevailed. The total has gone Under in each of the last seven Sixers-Hawks games. None of the final scores from the seven games came close to tonight’s total of 222.5. In fact, those seven games have averaged a total score of 203.5. The highest-scoring game among the last seven Sixers-Hawks games ended with 215 total points.  Four of the last five head-to-head games played in Atlanta have gone Under the total.