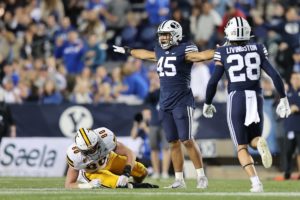 BYU quarterback Jaren Hall is a future NFL prospect. He will lead his No. 19 Cougars against visiting Utah State on Thursday night in Provo, Utah. For the Cougars, Hall has over 300 passing yards in back-to-back games and has nine touchdown throws to only one interception this year. In Saturday’s 38-24 victory over Wyoming at home, he passed for a season-high 337 yards and equaled his career high of four touchdowns. BYU is now 3-1 on the season.

Hall has 115 straight passes without an interception heading into tonight’s game against Utah State, which is just 1-3 so far. Hall has now gone 100 or more throws without being intercepted three times in his career. He has also had streaks of 163 and 119 games without throwing a pick. According to his head coach Kalani Sitake, Hall has a high football IQ and is smart with the football.

Despite receiver Gunner Romney missing the first four games because of an unexplained ailment, Hall has passed for 1,164 yards and has completed 71.5 percent of his throws this season. Hall is on track to easily outdo his accomplishments from last season. In 2021, Hall threw for 2,583 yards, 20 touchdowns, and five interceptions, completing 63.9 percent of his pass attempts. Last week, Hall led the Cougars to 525 total offensive yards against Wyoming. That marked the second time this season that the Cougars went over 500 total yards.

Utah State’s last three defeats have been by an average margin of 31 points. The Aggies suffered crushing defeats at the hands of Alabama, Weber State of the FCS, and Mountain West Conference opponent UNLV last Saturday. The Aggies went 11-3 last year and returned a ton of starters and experience from that team in 2022.

In the 34-24 loss to UNLV, Utah State had six turnovers, five of which were picks by quarterback Logan Bonner. He is a seventh-year senior who started his career at Arkansas State and transferred with Anderson to Utah State following the 2020 season.

Last year, Bonner set program records with 3,628 yards passing and 36 touchdowns. This year, he has been picked off eight times already and has 753 yards and six touchdowns. A veteran Aggies offense is scoring only 15.5 points per game on average while the Utah State defense gives up 36.

BYU beat the Aggies last season 34-20. The short week doesn’t give Anderson and Utah State much time to fix all of its problems. The annual series between the two schools will go on hold. There were still four future dates scheduled, but the Cougars will be moving to the Big 12 next season.