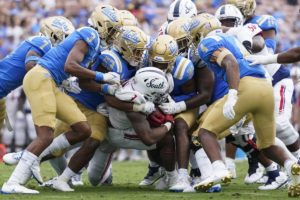 In order to be ready for its Friday night matchup with No. 15 Washington in Pasadena, UCLA is putting in extra effort. For the first time since 2015, UCLA is 4-0 under head coach Chip Kelly. For the Bruins to maintain their pristine record, they will have to beat the 4-0 Huskies before a challenging run of Pac-12 contenders.

Washington ranks as the No. 5 team in the nation in total offense averaging roughly 531 yards per game.

In each of their victories this season, the Huskies have scored an average of 44 points. New Washington head coach Kalen DeBoer has installed an up-tempo offense that will put UCLA to the test. Kelly and the Bruins have put up some solid offensive numbers as well.

In their first Pac-12 game, Washington defeated Stanford 40–22 behind quarterback Michael Penix Jr.’s 309 yards and two touchdowns. Penix, who played for DeBoer when he was the offensive coordinator at Indiana, completed 22-of-37 passes against the Cardinal. He is the nation’s top passer despite having his lowest output of the season against Stanford.

The Huskies have a very balanced offensive strategy. Washington has attempted 154 passes and 142 rushes. Ryan Grubb, the Huskies’ first-year offensive coordinator, thinks there is still room for improvement, particularly in the team’s effectiveness in the red zone. On 25 of their trips inside the 20, the Huskies have scored touchdowns on 64 percent of their trips. That ranks No. 72 among FBS programs.

The Bruin’s defense, on the other hand, has failed in the red zone. In nine of the opponent’s ten opportunities in the red zone, UCLA has given up points. The Bruins have allowed touchdowns on 60% of those drives. In their win over Colorado in Week 4, the Bruins conceded two touchdowns in the red zone. UCLA scored 45 points for the third time this year in their conference-opening victory. The Bruins’ 41.8 points per game average put them 20th in the country.

DeBoer is no stranger to the Bruins. He was the head coach at Fresno State last season when the Bulldogs defeated the 2021 Bruins 40-37 in a nail-biting track meet. DeBoer and the Bulldogs won on a touchdown pass with 14 seconds left in the game.

The UCLA defense is prepared to make life difficult for Penix and the Washington passing attack as the week begins. With 11 sacks, the Bruins are one of the top 24 defenses in the country. Laiatu Latu, who has five sacks, the third-most in FBS, is the team captain. Washington edge rusher Bralen Trice, who has 4.5 sacks, is right behind Latu.

A victory during a short week would be exactly what UCLA needs, especially in light of upcoming events. The next two weeks will see the Bruins play No. 12 Utah (3-1) and No. 13 Oregon (3-1). In its previous five games, Washington is 4-1 SU and ATS. In its previous nine home games against Washington, UCLA is 8-1 SU.