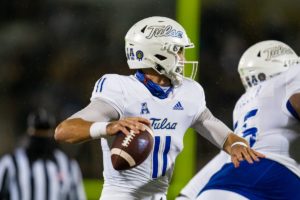 In Week 12 college football action, the South Florida Bulls (1-9 SU, 3-7 ATS) travel to the Tulsa Golden Hurricane in an effort to snap their eight-game losing streak. After falling to visiting Southern Methodist 41–23 last weekend, the Bulls now have the difficult challenge of ending a disastrous 17–game road losing skid.

Tulsa lost to Memphis 26-10 last week, the third loss in a row for head coach Philip Montgomery’s Golden Hurricane. Tulsa is 1-6 SU in its last seven games and hasn’t won a home game during that span.

Tulsa opened as an 11-point favorite and that has risen to its current -14. The AAC members have played in each of the previous three seasons with Tulsa winning the last two, including last year’s 32-31 victory. South Florida has won the last two times it has been to Tulsa. Four of the last five head-to-head games have been decided by a single possession.

The Bulls were actually tied with SMU at the half last week. Then, the Mustangs scored 24 consecutive points to win. South Florida gives up 39.9 points per game, which ranks 129th in the nation. The offense isn’t much better. Starting QB Gerry Bohanon was lost for the season with a shoulder injury. Backup Katravis Marsh could miss tonight’s game. He was just 12-of-31 with a touchdown and an interception last week.

The saving grace for South Florida could be the running game. The Bulls average 182.1 yards per game, which ranks 45th in the nation. Tulsa has the nation’s worst run defense. Tulsa gives up 211.6 yards per game on the ground. That plus the Bulls may have to start freshman Byrum Brown at quarterback.

Tulsa’s offense might get a boost from the Bulls’ defense. In their last two games, the Golden Hurricane have averaged 11.5 points, and in their last six games, they have only exceeded 21 points twice. In last week’s loss to Memphis, the offense managed just 85 total yards in the first half and committed two turnovers. QB Davis Brin was benched last week and has been injured this season.

Whoever starts at quarterback for Tulsa will need more from the offensive line. Tulsa has been sacked 19 times in its past four games. Running back Keylon Stokes, with three touchdowns in the past five games, will need to touch the ball more.