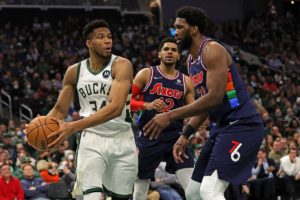 Tonight, a rematch of the season opener between the Milwaukee Bucks (11-3 SU, 10-4 ATS) and Philadelphia 76ers (7-7, 7-7) takes place at the Wells Fargo Center in Philly. Milwaukee has lost three of its last five games after beginning the year with a nine-game winning streak.

Despite their .500 record, the Sixers entered as a 2.5-point home favorite with the total set at 219 points. Both of those numbers have dropped in early betting.

The Bucks returned to the win column on Wednesday by defeating the Cleveland Cavaliers 113-98. Giannis Antetokounmpo had a somewhat quiet night with 16 points and 12 rebounds, while Brook Lopez was productive with 29 points in 30 minutes. The Cavaliers were led by Donovan Mitchell (23 points), Darius Garland (23 points), and Evan Mobley (20 points), who all scored 20 or more points.

With Antetokounmpo, a two-time MVP, Milwaukee has been known to put up big numbers on offense. This year, though, it has been their strong defensive play that has helped them get off to such a fast start. Milwaukee is second in the NBA in points allowed per game this year (106.4), just behind the Dallas Mavericks (106.3). The Bucks’ defense will have to figure out a way to slow down Joel Embiid.

The Sixers defeated the Utah Jazz 105-98 on Sunday to win their second game in a row. In the second half, Philadelphia tightened up defensively, limiting Utah to just 41 points over the final two quarters to secure the victory. Embiid scored a career-high 59 points, including 26 of his team’s final 27 points.

Along with Kobe Bryant, Michael Jordan, and Bradley Beal, Embiid became just the fourth player in NBA history to score 100 points in back-to-back games. On Saturday, he scored 42 points against the Atlanta Hawks. Through four games this month, the Sixers star has averaged a staggering 40 points per contest which is a good thing since teammate James Harden is still out of the lineup.

The Bucks must focus on and play solid defense, especially against Embiid. With Harden out, the Sixers’ offensive options are limited to Embiid and Tyrese Maxey, who is also having a productive season. Philadelphia is also very good defensively and is third in points allowed per game (106.5) just behind the Bucks. The Sixers will have to do the same – play solid defense to pull out a victory.

Milwaukee has won eight of the last ten against Philadelphia. The Bucks are 7-3 ATS in those 10 games. Milwaukee is 11-3 SU this season and 10-4 ATS. Though the Sixers are just .500 for the season, they are 6-3 SU and ATS in their last nine games. The total has gone Under is four of the Sixers’ last five games and seven of the Bucks’ last nine. In the series between the two teams, the Over is 10-5 in the last 15 meetings.