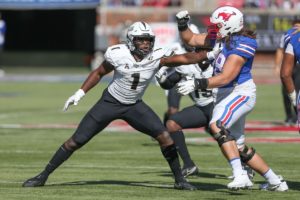 The American Athletic Conference announced last Friday that it had rescheduled the UCF and SMU conference opener in Orlando for Sunday due to the destruction brought on by Hurricane Ian last week. The storm really wreaked havoc on parts of Florida and the conference eventually moved the game to tonight. College football fans will get a nice midweek treat featuring two potent offensive attacks.

UCF head coach Gus Malzahn earlier this week stated that his squad would be prepared for whatever the impending powerful storm asked of them. On Wednesday, it made landfall on Florida’s west coast and then moved into Orlando with torrential rain and sharp winds. More than 420,000 customers in Central Florida were still without power as of Friday.

Last week, the SMU Mustangs (2-2) suffered their second straight loss by losing at home to rival TCU 42-34. The Knights (3-1) beat Georgia Tech on the road 27-10 despite some offensive struggles.

In the first quarter, UCF quarterback John Rhys Plumlee was unable to connect with any of his receivers. Plumlee had a terrible game, finishing 8-of-16 for 49 yards. He did not throw a touchdown and threw one interception. However, with 16 carries for a team-high 100 yards and a touchdown, Plumlee led a 284-yard UCF rushing attack. Thanks to RJ Harvey, Isaiah Bowser, and Plumlee, the Knights gained 5.1 yards per carry.

In last week’s game against the Horned Frogs, SMU fell behind 28-7 midway through the second quarter after four of TCU’s first five possessions ended in touchdowns. The Mustangs gained 476 yards of total offense, but their performance was hampered by QB Tanner Mordecai’s two interceptions.

Mordecai has been one of the more prolific quarterbacks in the country. He has thrown for 1,385 yards, 12 touchdowns, and five interceptions, but he has only completed 58.4 percent of his attempts. He has had eight different receivers catch touchdown passes, with Rashee Rice leading the Mustangs with 34 receptions for 565 yards and four touchdowns. Tre Siggers, the team’s leading rusher, has 200 yards and four touchdowns on 50 attempts.

Plumlee, who has 404 yards and four touchdowns, is UCF’s leading rusher. On 69 carries, Bowser has 228 yards and five touchdowns. The goal for Malzahn and the Knights is to maintain their superiority on the ground. Rhett Lashlee, the head coach at SMU, is intimately familiar with it. From 2013 to 2016, Lashlee served as Malzahn’s offensive coordinator while the two were at Auburn. During their stint, the duo went to the 2013 national championship game.

In the most recent ten meetings with SMU, UCF has prevailed eight times. The Knights have a 9-1 SU record in their previous 10 home contests and a 5-0 SU record against SMU. In their last nine games, the Mustangs have gone 3-6 SU and 1-5 ATS. SMU is 0-5 SU in its last five trips to play the Knights in Orlando.