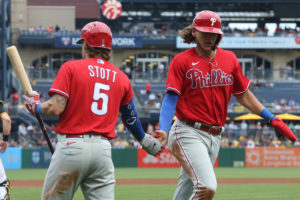 Philadelphia Phillies first baseman Rhys Hoskins has played in 665 regular-season games. He seems to have waited a baseball lifetime for the outcome of the 666th game. With their 3-0 victory over the Astros last night, the Phillies (87-73) earned the third and final National League wild-card spot, securing their first postseason berth since 2011. Hoskins had played in the second-most games among active major leaguers without making a postseason appearance going into this three-game interleague road series with the Astros.

Tonight, the Phillies will start left-hander Ranger Suarez (10-6, 3.37 ERA). In his most recent start, Suarez allowed two runs on seven hits against the Cubs. He struck out five and walked one in six innings as the Cubs beat the Phillies 2-0. This was Suarez’s first loss in three months. In his previous 12 starts, Suarez was 4-0 with a 2.27 ERA. Since a 4-1 loss to Atlanta on June 29, Suarez had only given up more than three earned runs in a start once. Tonight will be Suarez’s first career start against Houston.

Opposite Suarez, Houston will start AL Cy Young favorite Justin Verlander. The Astros right-hander is 17-4 with a 1.80 ERA. Houston has lost his last two starts despite Verlander having a 2.08 ERA and a .587 opponent OPS. Prior to those last two starts, Verlander had won nine of his previous 12 trips to the mound. Over 74.2 innings, he struck out 82 and had an ERA of 1.21.

Verlander leads the majors in ERA, adjusted ERA, and WHIP. He also leads the American League in wins, winning percentage, and hits per nine innings. In two starts versus the Phillies in his career, Verlander is 2-0 with a 1.93 ERA. He pitched for the Detroit Tigers in a 3-1 home victory against them on May 24, 2016, allowing three hits, two walks, and 10 strikeouts over eight scoreless innings. Verlander won the Cy Young award in 2011 and 2019

The Phillies have now won four of their last five games. They are also 5-2 SU in their last seven games against the Astros. Houston, which has the most wins in the AL with 104, has won 14 of its last 20 games.

The total has gone Under in seven of Philadelphia’s last 10 games on the road. The total has also gone Under in nine of the last 13 Phillies games against the Astros on the road in Houston. The Astros are the top Under team in MLB with an O/U record of 59-90-11. At home, Houston’s O/U mark is 31-44-4. What’s interesting is that in the last six games against the Phillies, the total has gone Over four times. Over the last 10 head-to-head meetings between the Phillies and Astros, the teams have combined for an average of 9.7 runs per game.