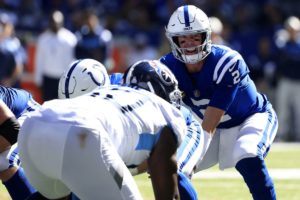 This game was probably marked on a number of calendars before the 2022 NFL season started. A potential Hall of Fame quarterback duel between Russell Wilson and Matt Ryan was something NFL fans could look forward to. In the offseason, both players switched teams. Ryan was sent from Atlanta to Indianapolis, and Wilson was sent to Denver from Seattle.

So far in the new season’s first four weeks, Wilson and Ryan have not impressed anyone. In actuality, both have had difficulties, and both of their teams have done poorly. With a 20-20 tie versus Houston to start the season, Indianapolis is now 1-2-1. Even worse was the Colts 24-0 loss to Jacksonville. Last year, the Texans and Jaguars won seven games combined.

Even though Ryan and the Colts defeated the Chiefs in Week 3 with a score of 20-17, the offense has been dreadful. Indianapolis averages 14.3 points per game, which ranks dead last in the NFL. The fact that Jonathan Taylor will not play in Thursday night’s game worsens the situation. The reigning NFL rushing leader is out due to an ankle injury. With the short week, there was no way Taylor could get ready to play.

Similar problems exist for the Broncos, but they are even worse. In Denver’s 32-23 defeat to Las Vegas last week, RB Javonte Williams tore his anterior cruciate ligament. Williams won’t be able to play the rest of the year. The 23 points Denver scored against the Raiders were a season-high for the Broncos. Denver’s scoring average is among the lowest in the league, much like the Colts’. The Broncos, who average 16.5 points per game, are ranked No. 30—two positions higher than Indy.

Both clubs have strong defenses, which have allowed them to stay in games early in the season. In terms of opponent yards per play, Denver and Indianapolis are both rated in the top seven in the NFL. The game on Thursday might turn into a defensive struggle because both offenses are having trouble.

For either team, that would be nothing new. Denver has only scored 20 points or more three times in its last ten games. In 11 of the Broncos’ previous 15 games, the game total went Under. In the Broncos’ last eight home games, the total has gone Under six times. The Broncos’ scoring defense, which allows 17 points per game, ranks seventh in the NFL.

In each of the Colts’ last nine games, the Under has prevailed. The Under is 8-0 in the Colts’ previous eight games against opponents from the AFC, and it is perfect 5-0 in Indianapolis’ last five road games. The Colts have beaten Denver in seven of the last ten head-to-head meetings. Indianapolis is also 7-3 ATS in those ten games.

Technical Trend: The Colts are 10-0 ATS as an underdog versus non-divisional opponents following a double-digit ATS loss in which they tallied fewer than five sacks.  Indianapolis has won the last three straight up, including this season’s win over the Chiefs.