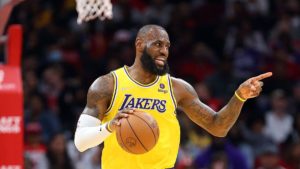 If there was ever a time the Los Angeles Lakers needed a win, it is tonight. LA welcomes Washington to town and the Lakers need to take care of business. Time is running out on their season. Los Angeles has won just one game in its last seven and the Lakers’ schedule over the final 17 games of the season is one of the toughest in the NBA.

The Wizards won’t be a pushover, but Washington has only won six of its last 20 games. Kristaps Porzingis finally made his debut for Washington after being traded from Dallas. That has made a slight difference for the Wizards, but this is a team that struggles on the West Coast. In their last nine games against teams in the Western Conference, Washington has failed to cover the spread in all of them.

After beating Golden State last Saturday, the Lakers have dropped two straight to not-so-good basketball teams – San Antonio and Houston. After having one of the best defenses in the NBA a year ago, the Lakers are one of the worst this season. They rank 26th in points allowed per game (113.2) and in their current 1-6 SU streak, the Lakers are allowing over 120 a game.

Anthony Davis remains out of the lineup for LA and LeBron James, Malik Monk, and Talen Horton-Tucker are all questionable with a variety of issues. All three are expected to play tonight, but playing James at center is not the answer. That proved to be a disaster against Houston and with the 7-foot-3 Porzingis in the middle for the Wizards tonight, James at center isn’t happening.

Los Angeles has been awful against the number too. In their current streak, they are 1-6 ATS. That’s been the trend for the season as the Lakers are 27-38 ATS overall and 14-21 ATS in home games this season. The Wizards aren’t much better. Washington has a 25-36-3 ATS record this season and they are 10-19-1 ATS on the road. The Wizards are, however, 3-1-1 ATS in their last five games and they are 4-2 ATS in the last six against the Lakers.

It’s also surprising that the Wizards are 12-4 SU in the last 16 games against Los Angeles. Tonight is the first time the teams have played this season. In two games last year, Washington won and covered in both games as an underdog.

Both teams trend Over for the season. Washington has an O/U record of 33-29-2. The Lakers hold a 36-29 O/U mark this season. Six of the last seven Wizards games have gone Over the total. Washington scored 153 in an overtime game against San Antonio and 133 in a win over Indiana. The Wizards have only won two of their last six games, but they are averaging almost 119 points a game in that span.