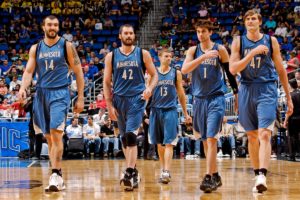 The best record in the NBA since the All-Star break does not belong to one of the teams at the top of their respective conference. That distinction belongs to the Minnesota Timberwolves who have won their last six games in a row and have a record of 7-1 since the break. Now, four of those wins came against Portland and Oklahoma City, but the TWolves did beat Cleveland, Golden State, and Memphis. Tonight, Minnesota gets Orlando, winners of just five of their last 20 games.

What’s surprising is that Orlando seems to own Minnesota when they play the Timberwolves at home. The last 13 times the TWolves have visited the Amway Center in Orlando the Magic have won 11 games. The Magic also own a win against Minnesota in the only game the two teams have played so far this season. That game was played back in early November and the Magic won 115-97 in Minnesota. Orlando is also 4-2 ATS in the last six games against the TWolves.

Since the calendar flipped to 2022, Minnesota is 22-10. That’s the sixth-best record in the league over that time period. In their current six-game winning streak, the TWolves have won by an average of 27.8 points. This week alone, Minnesota has beaten Portland by 43 and Oklahoma City by 30.

In their six-game streak, Minnesota has not scored less than 124 points in a game. The TWolves have averaged 130.8 points per game in their current streak. That spells trouble for Orlando, which ranks just 28th in the NBA in scoring. Orlando scores 103.8 points a game and prior to beating New Orleans on Wednesday night, the Magic scored 99 and 96 points in losses to Phoenix and Memphis.

Orlando has been good against the number recently with a 5-2 ATS record in its last seven games. The Magic are only 7-23 SU and 10-20 ATS in home games this season. Orlando is 7-2 ATS in its last nine games played in March.

Minnesota has covered in each of its last six wins. Winning by an average of almost 28 points a game will do that for you. The TWolves have struggled against Orlando though. In addition to losing 11 of 13 against the Magic in Orlando, Minnesota is just 5-13 ATS in the last 18 head-to-head games.

It should come as no shock that the Over has hit in 15 of Minnesota’s last 20 games. The Over is 5-2 in the last seven TWolves games, and Minnesota games are among the highest-scoring in the NBA. Each of the TWolves last nine road games has seen the total go Over.

It’s the opposite for the Magic. As mentioned, Orlando only scores 103.8 points a game and they are a middle-of-the-pack defense. As a result, the Under has cashed in six of their last seven games. Each of the last three games in this series has gone Under the total.