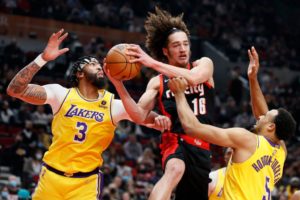 The Lakers continue to hang on to a play-in tournament berth. Last night, they were blown out by Phoenix 140-111. Los Angeles remains in ninth place in the Western Conference, a game and a half ahead of New Orleans and 4.5 games behind the eighth-place Clippers. Tonight, the Lakers welcome Toronto to town and getting a win will be extremely difficult.

When playing as a road favorite this season, the Raptors are 7-3 ATS and in games against teams from the Western Conference Toronto is 14-10-1 against the number. The Lakers, on the other hand, are a mess. Anthony Davis remains out of the Lakers lineup. Even with him though, L.A. still had its issues. The Lakers have lost 10 of their last 13 games and they are 4-9 ATS in those games. When playing on back-to-back nights, the Lakers are just 2-6 SU in the second game. The only glimmer of hope is that they did cover in five of those eight games.

For the season, both the Raptors and Lakers trend Over. Toronto’s O/U record is 35-32, but the Raptors had a recent run of five straight Unders and nine of 11 before going Over in both of its last two games. Remember, those two games were against two of the better offenses in the NBA – Phoenix and Denver.

The Lakers have the third-highest Over percentage in the NBA (56.7). At 38-29 O/U, only Minnesota and Miami have higher Over percentages. With Davis out of the lineup, the Lakers have had to resort to small-ball, which means playing at a faster pace. That has led to more Overs.

The L.A. defense is also a reason for the higher number of Overs. The Lakers rank 27th in points allowed per game (113.6). In their last three games, for example, L.A. has given up 129.3 points per game. You don’t win many games in the NBA giving up that many points. In back-to-back games this year, the Over is 5-3 for the Lakers in Game 2 and 17-8 O/U when playing an Eastern Conference opponent.