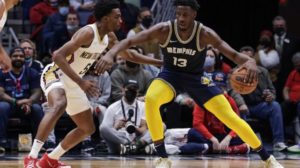 New Orleans has been playing very good basketball since the All-Star break. The Pelicans won their first four games in a row before losing to Denver on Sunday. New Orleans actually led into the fourth quarter before reigning MVP Nikola Jokic scored 30 of his 46 points in the final period and Denver won. The Pelicans will head to Memphis tonight where the Grizzlies will try and get their mojo back.

Memphis, now second in the Eastern Conference standings, is just 3-4 in its last seven games after a strong first half of the season. The Grizzlies lost to Houston, the worst team in the West, on Sunday. They also have a bad loss to Portland in that seven-game stretch. One of the reasons for the recent lapse is defense. Over their last seven games, the Grizzlies are allowing 113.7 points per game.

That Memphis defense will have its hands full tonight with a young Pelicans squad that has been pouring on the points as of late. In their recent 4-1 SU run, New Orleans is averaging 123.8 points per game. The trade for CJ McCollum has proven to be a good one. McCollum has ignited the Pelicans’ offense and is averaging over 26 points per game. His addition also takes some of the pressure off of Brandon Ingram, who had been the primary scorer for New Orleans with Zion Williamson being out of the lineup.

With their explosive offenses, both teams have been strong against the number recently. Memphis has covered in 12 of its last 17 games and is 6-1 ATS in its last seven games at home. New Orleans is 4-1 ATS in its recent five-game stretch. The Pelicans have also dominated the series with Memphis recently. New Orleans has won seven of the last ten head-to-head matchups. The Pelicans are 8-2 ATS – 7-1 ATS in the last eight – in those ten games. New Orleans is also 8-1 ATS in their last nine games on the road.

Both teams have been trending Under with five of the last six Memphis games seeing the total go Under. For New Orleans, four of the last five totals have gone Under. Both teams have faced some high totals which is likely due to their offensive production. Two of the last three games in the series have gone Under. Memphis won two of the three and New Orleans covered two of three. The two teams have averaged 222.6 points in those three most recent games. Over the last ten in the series, that number rises to 223.1.