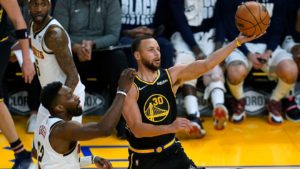 It’s an interesting matchup in Denver tonight. Golden State, which is suffering through its worst stretch of the season, will take on the Nuggets. Denver just played last night recording its eighth win in its last nine games. Nikola Jokic made another statement in his case for a second consecutive NBA MVP with a 45-point triple-double. Jokic had 46 points, 12 rebounds, and 11 assists to join just one other player in the history of the game to record the 45-point triple-double. The other guy? Hall of Famer Wilt Chamberlain.

What makes tonight’s game interesting is not only Denver playing on back-to-back nights, but also the Warriors will be resting several of their key players. Stephen Curry, Klay Thompson, and Andrew Wiggins will all be on the bench tonight. Draymond Green has been out indefinitely and is one of the reasons why Golden State is struggling. The Warriors have lost eight of ten since Green went down with a calf injury. Andre Iguodala is also out which means it will be up to the Warriors reserves to take care of business.

Those reserves will go up against a Nuggets team that will be feeling the effects of fatigue. Denver beat New Orleans last night but had to go to overtime to do so. Jokic and Aaron Gordon, who scored 28 points, each played 43 minutes last night. Monte Morris and Jeff Green played 36 and 34 minutes, respectively. Denver might have to dip into its bench as well tonight.

The last time Golden State rested its starters their bench actually had some success. The Warriors traveled to San Antonio and beat the Spurs while the stars rested. The Nuggets and Warriors have played twice so far this season. Both games were played at Golden State and Denver won both, one by three points and the other by one. The Nuggets covered as an underdog in each game.

The Warriors are just 1-10-1 ATS in their last 12 games. Twelve games ago, Golden State was 29-20-3 ATS, one of the better marks against the number in the league. With the Warriors’ defensive struggles recently, eight of the last nine Golden State games have gone Over the total. In their last three games, the Warriors have allowed an average of 125 points per game.

Denver also trends Over with a 35-29 O/U record this season and 18 of their 30 home games going Over the total. The trend in the Warriors-Nuggets series though has been the Under. Four of the last five games in the series played in Denver have gone Under the total.