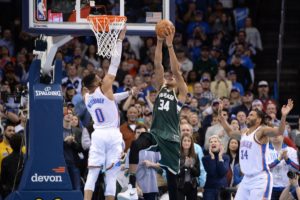 The Milwaukee Bucks have won four straight and it will be extremely difficult for Oklahoma City to keep pace with the defending champs tonight. The Thunder are one of the worst teams in the Western Conference. They have just three wins in their last 13 games and are coming off back-to-back blowout losses at home. The Thunder lost to Minnesota by 37 and lost the Jazz by 13 on Sunday. One look at OKC’s injury report and you can easily understand why the Bucks are such a big double-digit favorite.

Lu Dort, the Thunder’s second-leading scorer, is out tonight. Josh Giddey, the third-leading scorer, is out indefinitely and a host of others will be on the bench tonight as OKC faces one of the best teams in the NBA. Oklahoma City is dead last in the NBA in scoring averaging 102.1 points per game. The fact that the Thunder is the worst shooting team in the league is one of the big reasons. OKC is 30th in overall field goal percentage and three-point field goal percentage.

The Bucks are averaging 125 points a game in their current four-game winning streak. In a huge 132-122 win over Phoenix on Sunday, Khris Middleton exploded for 44 points. Middleton averages 20.2 points per game. Giannis Antetokounmpo is a top-5 scorer in the league with 29.2 a game and Jrue Holiday adds 18.6. The Bucks are third in the league in scoring now averaging 114.1 points per game.

Milwaukee has done well against Western Conference teams this season. The Bucks are 14-4 against the West. That includes Sunday’s win over the Suns. Milwaukee has won four of the last five over Oklahoma City, but the Bucks do struggle against the number. In their last nine games, Milwaukee is just 3-6 ATS. In the series with the Thunder, the Bucks are 2-5 ATS in the last seven head-to-head games.

Regardless, this is a Thunder team on a seven-game losing skid at home. Don’t forget, two of their top three scorers will be out tonight. Still, the Thunder have been good to bettors. Over their last ten games, OKC is 6-3-1 ATS and the Thunder are one of the best teams in the NBA against the number this season. OKC has covered 63.3 percent (38-22-4 ATS) of the time this season. Only Memphis has a higher cover percentage.

Backing the Over in Milwaukee games has also been profitable for bettors. The Over has cashed in 10 of the last 12 Bucks games. That includes four of the last five Bucks road games. The Bucks have also given up almost 118 points over their last three which has helped push totals to the Over. OKC doesn’t score much, but they have put up 107.7 points – five points over their average – in their last three games.

In each of the last two head-to-head games, neither team reached 100 points. The last three games in the series have averaged 197 points. Going back ten games, the two teams have averaged 210.5.