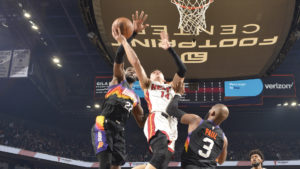 The top two teams in each conference will meet tonight in Miami as the Heat hosts the Suns. Phoenix is coming off a 102-99 win over Orlando just last night. The shorthanded Suns have won three of their last four games and will likely have Devin Booker tonight. The Suns leading scorer had been out on quarantine. Chris Paul remains out indefinitely and Cam Johnson is listed as questionable for Phoenix, which has the best record in the NBA at 52-13.

The Heat have been rolling lately with wins in each of their last three games and seven in their last eight. Miami has been outstanding at home where they are 23-7 for the season and have won 17 of the last 20. The Heat have also done well against Phoenix when playing at home. Over the past 11 such games, Miami is 8-3 SU against the Suns.

It’s been the defense of the Heat that has really led Miami’s recent successes. The Heat rank fourth in the league in points allowed (104.6). They beat Houston on Monday night and held the high-scoring Rockets to 106 points. In their game before Houston, Miami gave up just 82 to Philadelphia and in their 7-1 SU win streak the Heat also beat Chicago 112-99.

With Booker on the floor, the Suns are a different team. Booker averages 25.6 points a game and really makes the Suns offense go. Phoenix ranks fifth in the NBA in scoring averaging 113.7 points per game. 7-footer Deandre Ayton is a big part of the offense as well. He led the Suns with 21 points and 19 rebounds in last night’s win over Orlando.

The two teams have played once this season. Back on Jan. 8 in Phoenix, Miami recorded a 123-100 victory as a 9.5-point road underdog. The Heat played that game without leading scorer Jimmy Butler (21.4 ppg) or Bam Adebayo (20.8 ppg). Both will play tonight.

Miami is 5-0 ATS in its last five games and 6-1 ATS in its last seven. The Heat have been a solid team to back this season with one of the best cover percentages in the league. Miami is 39-26-1 ATS this season. That includes a 17-13 ATS mark at home. Over the last ten games against Phoenix, Miami has covered six times.

Both teams trend toward the Over. Nine of the last 13 Suns totals have gone Over. The Heat’s O/U record for the season is 39-27 and seven of the last nine Suns-Heat games have seen the total go Over.