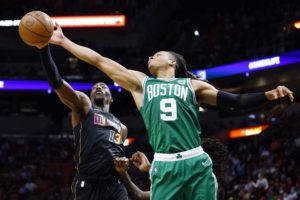 Both Miami and Boston have won three of their last four games though each team enters tonight’s with different concerns. The Heat come into tonight’s game coming off a triple-overtime loss to Toronto on Saturday. Four Miami players played at least 45 minutes on Saturday, which means fatigue could be a factor tonight. The other major concern is in relation to Heat star Jimmy Butler who is listed as questionable for tonight’s game.

Butler played 52 minutes on Saturday and finished with 37 points, 14 rebounds, and 10 assists for the triple-double. He also has an ankle issue that will likely leave him less than 100 percent even if he does play tonight. Boston has already beaten Miami once this season and if Butler doesn’t play the Celtics will surely be looking to take advantage.

The Celtics come into tonight’s game fresh off a 107-97 win over New Orleans on Saturday. Boston didn’t need to go into overtime either. Celtics stars Jayson Tatum and Jaylen Brown each scored over 30 points in the win over the Pelicans. Miami will have its hands full trying to defend both Tatum and Brown, especially if Butler doesn’t play.

For Boston, the big issue is simply consistency. Lately, the Celtics have been pretty good. In addition to three wins in their last four games, Boston has won eight of its last 12. The Celtics are a top-6 defense and, as a result, are favored by 2.5 points at home tonight. Being the favorite is a role the Celtics have liked this season. As a favorite, Boston has won 21 of 33 games, including a 16-10 record when playing at home in TD Garden.

The Celtics have covered the spread in three of their last four games, but for the season they are 24-26-1 ATS. At home, Boston is 11-14-1 ATS and the Celtics are just 2-9 ATS in their last 11 games against the Heat. One of those covers was in the game played earlier this season when Boston won 95-78 as a 6.5-point underdog.

Miami (32-18) has won seven of its last ten games and is currently first in the Eastern Conference standings. The Heat are just a half-game ahead of second-place Chicago and just 2.5 games separate first place from sixth in the East. That makes every game important in the quest for playoff seeding.

The Heat are 9-4 ATS in their last 13 games and, like Boston, Miami relies on its defense. The Heat rank fourth in the NBA allowing 104.5 points per game. Boston is sixth at 104.8. Interestingly, the Over is 5-0 in Miami’s last five games. The Over is also 6-1 in Miami’s last seven road games. The Celtics trend Under with a 21-29-1 O/U record for the season. The total has gone Under in six of the last seven Celtics games. The last game Miami and Boston played featured just 163 points, far below tonight’s total of 209.5.