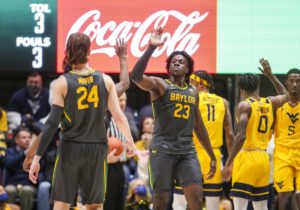 Two weeks ago, West Virginia was 13-2 and looking like it could earn a top-4 four seed in the NCAA tournament. Then, the Mountaineers’ defense fell apart and head coach Bob Huggins’s team lost five straight. One of those losses was at home to the Mountaineers opponent tonight – Baylor.

The Bears are currently ranked No. 4 in the country and were on a roll themselves before they lost to Alabama on Saturday. Baylor went toe-to-toe with the Crimson Tide, but couldn’t overcome Alabama’s 59.2 percent shooting from the field. The result was an 87-78 loss. The Bears also lost consecutive Big 12 games to Texas Tech and Oklahoma State just two weeks ago. Both of those games were at home and another home loss could affect the Bears getting a No. 1 seed in the NCAA tournament.

To do so, West Virginia will have to slow down the guard-heavy lineup of LJ Cryer (13.9 ppg), James Akinjo (12.9), Adam Flagler (12.7), and Kendall Brown (10.1). Before the Alabama loss, Baylor won three games in a row over West Virginia, Oklahoma, and Kansas State. The three victories were by an average margin of 16 points. It’s no surprise then that the Bears covered the spread in all three games.

The Bears beat West Virginia 77-68 on Jan. 18. Cryer led Baylor with 25 points. The Bears didn’t shoot well in that game hitting just 39.3 percent (24-of-61) from the floor. They did make five more three-pointers than the Mountaineers did.

Three of West Virginia’s five straight losses have been by double figures. The Mountaineers did not cover the spread in any of those five games. In fact, WVU is just 8-12 ATS for the season and only 1-4 ATS when playing on the road. Baylor covered in three straight before Saturday’s loss as a three-point favorite. The Bears are 12-8-1 ATS for the season and 7-5 ATS at home.

What’s interesting is despite West Virginia’s penchant for defense the game total has gone Over in their last five straight games. In the Mountaineers’ last eight wins though, the Under is 6-2. WVU’s opponents averaged just 56 points in those eight games. Baylor, which ranks 20th in the nation allowing 60.6 points per game, trends Over. For the season, the Over is 12-9 in Bears’ games. In their last 12 games, the Over has hit in eight of them and the Over has cashed in six of the last seven games against West Virginia.