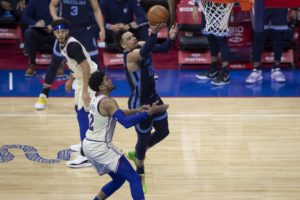 In a matchup of the third seeds in each conference, Philadelphia hosts Memphis tonight. Both teams have been streaky as of late with the Sixers winning four straight and the Grizzlies three straight. Philadelphia has been extremely hot since Christmas winning 14 of their past 15 games. Memphis has won 16 of its last 19.

Two players, who will both play key roles tonight, are the big reasons why each team has been doing so well. Joel Embiid, once listed at +5000 to win the NBA MVP, is now the frontrunner to win the award at most sportsbooks. In his last ten games, Embiid is averaging a ridiculous 35.2 points and 11.1 rebounds. Embiid hasn’t scored fewer than 25 points in a single game since before Christmas. In the Sixers’ most recent win, a 103-101 victory over Sacramento on Saturday, Embiid had 36 points and 12 rebounds.

For Memphis, it has been the play of guard Ja Morant that has propelled the Grizzlies up the Western Conference standings. Memphis also won on Saturday beating Washington 115-95. Morant scored a game-high 34 points. It was his sixth straight game with 30 or more points. Just recently selected to the All-Star team, Morant is averaging 30 points, 7.4 assists, and 6.4 rebounds per game since the calendar turned to the New Year.

Tobias Harris averages 18.7 points and Tyrese Maxey 16.4 for the Sixers. Seth Curry (15.6 ppg) and Shake Milton (10.5 ppg) also average in double figures for Philadelphia. Embiid’s supporting cast may have to come through tonight given his track record against the Grizzlies. Embiid has played against Memphis six times in his career. He has never scored more than 16 points against the Grizzlies and that was back in 2018.