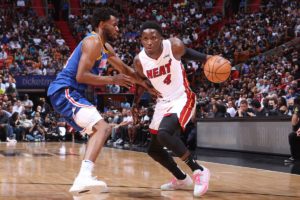 When the Golden State Warriors play the Miami Heat on Thursday night in San Francisco, Klay Thompson will have the chance to get past a rare embarrassing event. Thompson and Devin Booker of the Phoenix Suns got into a verbal argument during the third quarter of Tuesday’s Warriors game. For their contributions to the altercation, Thompson and Booker both received a technical foul. Mikal Bridges then said something that irked Thompson, and the Warriors forward was given a second “T” and removed from the contest.

It was Thompson’s first ejection of his career. Stephen Curry, former two-time MVP of the Warriors, seemed unaffected by Thompson’s ejection. Curry appeared surprisingly upbeat despite being held to fewer than 30 points for the first time this season as the Suns handily defeated Golden State, 134-105.

On the second night of a back-to-back, the Heat might have trouble recognizing Thompson when he enters the arena. Thompson hasn’t faced Miami since February 2019. Thompson scored 36 points against them in that game after scoring 29 in a game against the Heat just 17 days earlier.

The Warriors’ bench defeated the Heat 42-13 that evening. Three of Golden State’s key backups from that game, Damion Lee, Gary Payton II, and Nemanja Bjelica, are no longer with the Warriors. The Warriors have chosen a younger bench, which frequently results in games ending in worse condition than when they began. In fact, the worst 11 in terms of net rating in the NBA include James Wiseman (minus-54), Poole (minus-52) and Jonathan Kuminga (minus-42), all from the Warriors.

The Heat will have a different degree of depth when they play in San Francisco, depending on how Heat coach Erik Spoelstra manages his team’s first road back-to-back of the season. Without playing any of its starters, Miami destroyed the Portland Trail Blazers 119-98 last night in the first game of a four-day, three-game trip.

By using their starting nine healthy players on both ends of a home back-to-back last week, the Heat were able to bounce back from a loss to the Boston Celtics by defeating the Toronto Raptors the following night. Similar to the Warriors, the Heat and the Raptors got into a fight last week. As a result, Caleb Martin was given the boot and was suspended for Miami’s loss to Toronto in the rematch two nights later. Martin made a second start last night, and he ended up scoring 16 points in the win over Portland.

Golden State is 15-2 SU in its previous 17 games at home and has won five of its last seven games overall. In their last eight home games versus Miami, the Warriors have a 7-1 SU record. The Heat’s record over its last nine games is just 3-6 SU. In its last six games, Miami is 1-5 ATS, but in its last eight games versus the Warriors, it is 6-2 ATS.