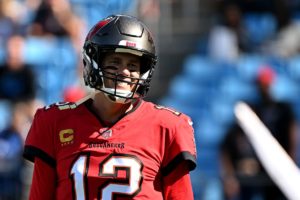 This week’s Thursday Night Football clash pits the Baltimore Ravens (4-3, 2-4-1 ATS) against the Tampa Bay Buccaneers (3-4 SU, 2-5 ATS). The Buccaneers have failed to cover the spread in four of their past five games after suffering a humiliating 21-3 loss to the Carolina Panthers last Sunday as massive 13-point road favorites. Tampa Bay was a 1.5-point home underdog but now finds itself a 2-point home chalk.

The Bucs have performed horribly twice in the previous two weeks. Prior to losing to the Panthers last week, the Bucs suffered a 20-18 setback to Pittsburgh as a 9.5-point favorite. Tampa Bay hasn’t closed as a home underdog since defeating the Kansas City Chiefs 31-9 in Super Bowl 55, a game that was played on their home turf.

Baltimore RB Gus Edwards carried the ball 16 times for a total of 66 yards against the Browns. Edwards was making his comeback after missing more than a year due to an ACL tear. With 10 carries for 59 yards from quarterback Lamar Jackson and 26 yards on five carries from Justice Hill, the Ravens’ ground game was its usual self. That running game will keep Baltimore in this game tonight.

After their poorest performance since future Hall of Famer Tom Brady joined the team, the Buccaneers need to regroup. Brady and head coach Todd Bowles have endured some criticism. A win tonight would help put a stop to that.

The Bucs’ defense will need to contain Jackson and the Ravens’ rushing attack if they want to win. The Bucs’ best course of action is probably to force Jackson to win with the passing game. This season, Baltimore has played it fairly safe and mainly depended on their running game. Tampa Bay’s offense depends on Brady getting things going against a questionable Ravens pass defense. Baltimore ranks 28th in pass defense, giving up 267.3 yards each game.

The Ravens will try their best to take advantage of a Tampa Bay run defense that was destroyed by Carolina last week. The Panthers carried the ball 27 times for 173 yards, averaging 6.4 yards per carry. The Bucs allow 17.2 points per game, which puts them seventh in the league this season, but their run defense is struggling.

Although the Buccaneers’ offense only scores 20.2 points per game on average (21st in the NFL), the game of 46 is a reflection of both teams’ recent defensive troubles. Baltimore has won the last four games in a row and is 5-2 SU against Tampa Bay. Against the number, both sides have performed poorly. Tampa Bay is 0-5 ATS in its last five games, while Baltimore is 1-4-1 ATS in its last six.