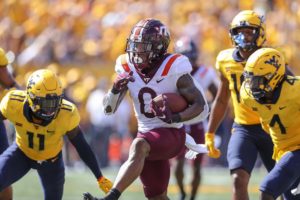 No. 24 North Carolina State needed some extra time off. After losing to Syracuse on October 15 and effectively eliminating NC State from contention in the ACC’s Atlantic Division, the Wolfpack (5-2, 1-2) needed time to reset. Tonight, the Wolfpack will now attempt to bounce back against struggling Virginia Tech on Thursday night in Raleigh, North Carolina.

The big issue for NC State head coach Dave Doeren is his quarterback. Devin Leary, the Preseason Player of the Year, suffered a season-ending injury, forcing backup Jack Chambers to start as quarterback for Syracuse. With 12 days between games now, Chambers should be better prepared. With just three days to get ready for Syracuse, Chambers struggled.

Virginia Tech (2-5, 1-3) required some time to rest and reorganize as well. They come into this game on a four-game losing streak, which is the longest skid in thirty years. In four of their seven games this season, the Hokies have failed to score 20 points.

The offense at Virginia Tech needs a boost, and Kaleb Smith is demonstrating the capacity to deliver it. Against Pittsburgh, he had nine receptions for 152 receiving yards, making him the only Hokie in a 10-game run to surpass 100 receiving yards in a game.

Using running backs Keshawn King (259 yards on 44 carries, 2 TDs) and Malachi Thomas (125 yards on 28 carries, 1 TD) together on the field is one strategy the Hokies might use to put more points on the board. The Hokies will have a tough time with one of the better defenses in the ACC and in the country.

The NC State defense ranks second in the ACC and 15th in the nation with 16.9 points allowed per game. In their five wins this season, NC State has held its opponents to 20 points or less. The Wolfpack anticipates some adjustments from the Hokies.

Since joining the ACC, Virginia Tech has a 5-1 record against NC State, including four straight victories by margins of more than ten. Despite having a strong performance with a 23-11 record on Thursday evenings since 1994, the Hokies are making their first trip to Raleigh for a Thursday night matchup.