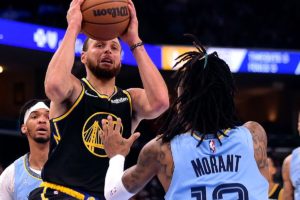 Golden State has an opportunity to send the Memphis Grizzlies home for the offseason with a win in Game 5 tonight. The Warriors rallied to take a 101-98 victory in Game 4 to take a 3-1 lead in their Western Conference semifinal series with the Grizzlies. It was a hard-fought win for Golden State which was supposed to have a much easier time given the fact that Memphis star Ja Morant was out of the lineup.

Speaking of Morant, it doesn’t look good for the Grizzlies star. He has a bone bruise which will likely end his season even if Memphis somehow finds a way to come back from this 3-1 deficit. That leaves the Grizzlies without their leading scorer though Memphis has done well without Morant. With the loss in Game 4, the Grizzlies are now 20-6 in games this season without Morant.

The Warriors, who played without head coach Steve Kerr due to a COVID diagnosis, outscored Memphis 39-29 in the decisive fourth quarter. Stephen Curry hit eight free throws in the game’s final 45 seconds to help seal the win. Curry scored a game-high 32 points and dished out eight assists. Curry and Klay Thompson (14 points) continue to struggle from behind the arc. In Game 4, the pair combined to hit just 4-of-21 shots from three-point range. All four made threes were by Curry. Thompson went 0-for-7. The Warriors as a team shot just 9-of-37 or 24.3 percent from long range.

The Grizzlies played inspired without their star player. The defense was able to slow down Golden State’s offense, which had put up some big numbers in the series, including 142 points in Game 3. Memphis struggled just like the Warriors with their long-range shooting. The Grizzlies shot just 9-of-35 from three-point range. Memphis will have to be more efficient with its three-point shooting if they are going to have any chance of extending this series. They have done well at home this season – 33-13 SU – and the Grizzlies need to take advantage of playing at home tonight.