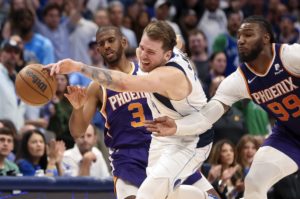 Like the Sixers-Heat series in the East, the Suns-Mavericks series in the West has followed a similar path. Phoenix looked almost unbeatable in Games 1 and 2. Dallas returned home and responded with consecutive victories. The series has been an interesting one so far. None of the four games have been closer than seven points. In each game, the home team has controlled the pace. With the series tied at 2-2, it’s back to Phoenix where the Suns are 36-10 this season. The Footprint Center is a venue that has not been kind to the rest of the NBA, particularly Dallas.

Dallas has lost seven straight games when playing on the road in Phoenix. With their two wins at home in Games 3 and 4, the Mavericks are now 2-11 in their last 13 games against the Suns. If they want to steal a game in Phoenix, they are going to have to keep up the pressure on Chris Paul. Dallas took the Suns’ point guard completely out of his game on Sunday. Paul would eventually foul out of the game.

Paul and the Suns are going to have to get back to their Game 1 and 2 form if they are going to continue their march to the NBA Finals. With the home team controlling the tempo in each game so far, Phoenix could have the upper hand tonight. The first two games of the series played in Phoenix both went Over the total. The Suns scored 121 and 129 points in those games. In Dallas, the Mavericks’ defense took over and set the pace. Phoenix scored 94 and 101 points in Games 3 and 4 and both games when Under the total.

The Mavs Luka Doncic has been outstanding thus far, but it was his teammates that stepped up in Games 3 and 4. Maxi Kleber, Spencer Dinwiddie, and Davis Bertrans all came off the bench in Game 4 to score in double figures. Dorian Finney-Smith hit 8-of-12 from behind the arc and scored 24 points while Jalen Brunson added 18. Doncic was still the Mavs leading scorer with 26.

Phoenix will try and get back to what they did in Games 1 and 2. They will also have to work extra hard to protect the basketball. In each of the last two games, the Suns had 17 turnovers. Phoenix is now 4-2 SU and ATS in its last six games. The total has gone Over in six of the Suns’ last nine games.

With wins in Games 3 and 4, the Mavs are now 13-5 SU in the last 18 games. They are 7-2 ATS in their last nine games. As mentioned the Mavs have just two wins in the last 13 games against Phoenix. Dallas also trends Under, which is because of their outstanding defense. The total has gone Under in five of the Mavericks’ last seven games.

Phoenix averages 115 points per game at home. In their 46 games at home this season, the Suns and their opponents have averaged 222 points per game. That’s quite a bit higher than tonight’s total of 213. That total reflects what has happened in Games 3 and 4. It is the lowest total of the series thus far.