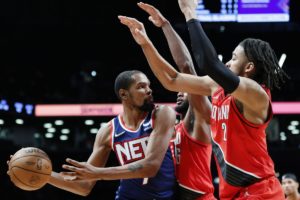 On Thursday, the Portland Trail Blazers (10-4 SU, 11-3 ATS) will host the Brooklyn Nets (6-9, 6-9) at the Moda Center in an attempt to maintain their strong start to the new season. The Trail Blazers will be looking for their fifth win in a row.

Portland opened as a 4-point favorite, but that line has dropped to its current 2.5. If history is any indication, the Trail Blazers have an edge on Brooklyn. Portland has won 13 of its last 18 games against the Nets.

Brooklyn lost its second straight game on Tuesday night, losing 153-121 to Sacramento. The Kings’ total was the most points ever given up by a Nets team in regulation play. Six Kings scored in double digits, including Terence Davis, who led Sacramento with 31 points. The only player for the Nets who scored 20 or more points was Kevin Durant (27 points). The Nets played without Kyrie Irving for the sixth straight game.

Irving has been out of the lineup since November 1 and was given a minimum five-game suspension by the team. He most certainly won’t play again until Sunday at the earliest. In Irving’s absence, the Nets have distributed the load and have remained afloat, going 4-3 without their star point guard.

Portland quickly rebounded from its loss to the Dallas Mavericks on Saturday by defeating the San Antonio Spurs 117-110 on Tuesday. Damian Lillard scored 22 points and dished out 11 assists for a double-double, while Jerami Grant led the Trail Blazers with 29 points.

Portland’s offense this season has averaged just 109.9 points per game (23rd), but the team’s sixth-ranked NBA defense has made up the difference (107.6 points against per game). Through their last four victories, the Trail Blazers have only given up 101.8 points per game, which would place them as the NBA’s top defensive club.

Although Durant will undoubtedly play a significant role for the Nets, he most likely won’t be able to do it all himself. The Nets need guys like Seth Curry and Nic Claxton to step up and assist Durant with the scoring load.  If Brooklyn is going to have any chance, they are going to have to step up.

The Trail Blazers currently have a lot going for them, which is why they have had such good early-season success this year. They have three players (Lillard, Anfernee Simons, and Grant) who average 20 or more points per game. They are also among the NBA’s best defensive teams.

Prior to its last two games, the Nets had not allowed more than 96 points in five straight games. Jacques Vaughn taking over as head coach has significantly improved the Brooklyn defense. The Under is 7-2 in the Nets’ last nine games and 5-2 in its last seven on the road. In the last five games against Portland on the road, the Under is 4-1. The total has gone Under in 13 of Portland’s last 19 games.