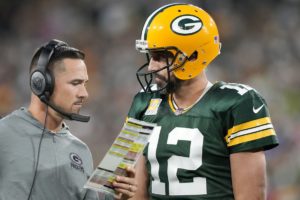 In their game against the Tennessee Titans tonight, the Green Bay Packers (4-6 SU, 4-6 ATS) are aiming to carry over some of the momentum from their upset of Dallas last week. The Packers defeated the Cowboys 31-28 in overtime after overcoming a 14-point fourth-quarter deficit.

Five defensive starters were out for the Titans, but Tennessee still defeated Denver 17-10 last week. The Titans held Denver to just three yards per carry on the ground and they didn’t allow Denver a single second-half point. The Titans covered the spread for the eighth straight time as a result.

Given the short week, it’s likely that Titans head coach Mike Vrabel will continue with a conservative game plan. This is crucial if starters like defensive lineman Jeffery Simmons, safety Amani Hooker, and outside linebacker Bud Dupree are unable to fully recuperate from their injuries. The injured ankle that prevented starting quarterback Ryan Tannehill from playing in the two games before last week’s victory over Denver might still be limiting him.

Derrick Henry of Tennessee might do some damage against a Green Bay defense that allowed Dallas to average 5.1 yards per run last week. Last week against Denver, Henry’s streak of 100-yard performances came to a stop after five. Tannehill threw for 255 yards and two touchdowns, and Henry had 19 carries for 53 yards on the ground. The defense did what it does best and kept Tennessee in the game as it has done all season. Against the Packers’ weak offense, the Titans should be able to do the same.

The Titans’ offense isn’t anything special either. This season, Tennessee has yet to score more than 24 points in a single game. Six consecutive Titans games have ended in Unders thanks to the offense and a top ten scoring defense. The total has gone Under in eight of Tennessee’s nine games. Remember that Tennessee’s defense has limited five of its previous six opponents to 17 points or fewer.

With the victory over Dallas, Green Bay ended a five-game losing streak and covered the spread for the first time in seven games. Aaron Jones rushed for 138 yards and a touchdown, and rookie wide receiver Christian Watson caught three touchdown passes. Rudy Ford, the Packers’ backup cornerback, had two long interception returns that led to two of the team’s four touchdowns.

For Green Bay, the chance to play in prime time couldn’t have come at a better moment. In its last 15 outings at prime time, Green Bay is 13-2. In addition, the Packers have won eight of their previous nine games in prime time. Plus, they get a Tennessee team that is banged up on a short week.

Green Bay opened as a 1-point favorite due to the Packers’ victory the previous week and the fact that they will be playing on the frozen tundra of Lambeau Field. Betting has bumped the line to Green Bay -3. The Over has cashed in six of the previous seven games these two teams have met.