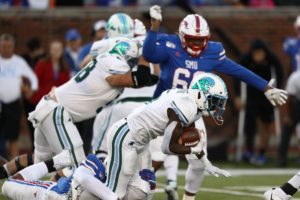 In the American Athletic Conference, Tulane is no longer alone in first place. Last Saturday, the Green Wave suffered a 38-31 home loss to UCF, dropping into a three-way tie for first place in the AAC with Cincinnati and the Knights.

Tulane head coach Willie Fritz recognizes that his team must simply move forward. SMU will present another challenge to what is Fritz’s best team so far at Tulane.

By winning its final two games, Tulane, which wraps up the regular season on Nov. 25 at Cincinnati, may still lock up a position in the league championship game on Dec. 10. That game will take place at the home of the regular-season champion. Additionally, winning the AAC would almost certainly guarantee that the Green Wave would represent the Group of Five in a New Year’s Six bowl game.

With only four minutes remaining in last week’s game, Tulane found itself down 10-0 to UCF. Three times they were behind by 17 points before battling back, but they were never able to overcome the deficit.

UCF gained 336 yards on the ground against the Green Wave, including 176 from quarterback John Rhys Plumlee. That is 136 more rushing yards allowed than Tulane had in its previous worst run-defense performance.

Since joining the AAC, the Mustangs have a perfect 7-0 record against Tulane. SMU has the rushing attack to possibly duplicate UCF’s victory over Tulane. In a 41-23 victory over South Florida on Saturday, Camar Wheaton, a transfer from Alabama, rushed for 112 yards, matching his teammate Tyler Lavine’s total. He also scored his first two collegiate rushing touchdowns.

SMU head coach Rhett Lashlee has not one, but two running backs that could give Tulane’s defense trouble. Then, there is quarterback Tanner Mordecai. He had 280 passing yards and two touchdowns in the win over South Florida. The win over the Bulls helped SMU earn its third straight win and become bowl eligible.

The Mustangs are now 2-0 in November with two huge games left. Tonight’s Tulane matchup comes before SMU faces Memphis in its season finale. The Mustangs have participated in bowl games each of the last three seasons, but each time they entered the AP Top 25 before falling out of the final rankings due to a late-season collapse. Lashlee would like to avoid that in 2022.