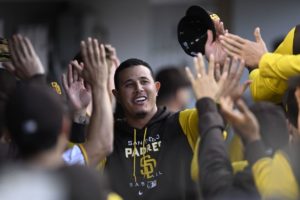 The Major League Baseball season is marked by ups and downs for individual teams. For Seattle, the Mariners experienced both the high and the low in their win over Atlanta on Sunday. The Mariners (79-61) took a four-run lead into the ninth inning on Sunday after splitting the first two games of the series.

With two outs, Atlanta’s Michael Harris II blasted his second home run of the contest, a three-run bomb off the facade of the third deck in right field, to make it 6-5 after Diego Castillo had walked the first two players he saw. It appeared the Mariners were destined for a loss. Rookie Julio Rodriguez thought otherwise.

Rodriguez hit a solo shot off Braves closer Kenley Jansen to tie the game. Rodriguez’s homer left the park at 117.2 mph, the fastest ever hit off of Jansen. One out later, Eugenio Suarez homered to give Seattle a dramatic 8-7 walk-off win. With the win, the Mariners tied Tampa Bay for the first wild card spot in the American League.

The Padres (77-64) lost to the Dodgers 11-2 on Sunday. That was the second consecutive loss for San Diego. Padres’ right-hander Yu Darvish (13-7, 3.31 ERA) is slated to start the first game of the series tonight. Darvish has won each of his last three starts. In his career, Darvish has made 13 starts against the Mariners. He is 6-4 with a 4.19 ERA against Seattle.

Seattle will counter with right-hander Logan Gilbert who is 12-5 with a 3.23 ERA this season. He has won his last two starts and the Mariners have won each of his last three. Gilbert hasn’t given up a run in 12 innings and each of his last four starts has gone Under the game total. Gilbert only faced the Padres once before, in a 6-2 Mariners win on July 5 at San Diego. Gilbert won the game after pitching 5.1 innings while giving up just two runs, one of which was earned.

The Mariners are one of the hotter teams in baseball during the second half of the season. They are 10-3 SU in their last 13 games. Seattle won both games of a two-game series earlier this season against the Padres. The two teams don’t meet that often, but the Padres have held the upper hand winning 13 of the last 19 head-to-head meetings. San Diego is also 5-2 SU in the last seven on the road in Seattle.