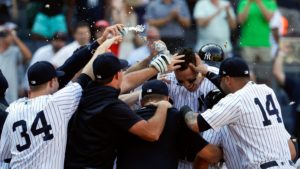 It was just last weekend when the Yankees and Astros split a four-game series. Now, the two World Series favorites will meet for the last time this season beginning today. The Yankees, of course, have the best record in baseball at 56-20. New York leads the AL East by 13 games over rival Boston. The Astros (47-27) have an 11-game lead over the Rangers in the AL West.

Tonight, New York will put Luis Severino on the mound. He took one of the Yankees losses last weekend. He pitched six innings and gave up three earned runs in a 3-1 loss to Houston. Severino is 4-2 with a 3.38 ERA and has given up eight earned runs over his last two starts. He has also struck out 26 batters over his last three starts, a total of 17 innings. Severino may be due for even better results as his xERA is 2.67, which is in the top 10 percent of all pitchers.

Severino could have an easier time with the Houston lineup tonight. That’s because the Astros will be without Michael Brantley (.288, 5 HR, 26 RBI) and also possibly MVP candidate Yordan Alvarez (.316, 23 HR, 56 RBI). Alvarez left yesterday’s game against the Mets and did not return. Houston beat the Mets 2-0 to take both games of a two-game series.

Houston will go with right-hander Luis Garcia who did not face New York last weekend. Garcia has won his last two starts – against the Mets and Rangers – allowing four earned runs over 11 innings while striking out 14. Garcia is 5-5 this season with an ERA of 3.55 which is right in line with his xERA of 3.64. The issue with Garcia is that he pitches much better on the road than at home.

In home starts this season, Garcia’s ERA is 5.17. That is more than double his road ERA of 2.37. In his last two home starts, Garcia has allowed eight earned runs. In his last two road starts, Garcia has allowed four earned runs. The Astros have won five of their last six home games and four of their last five overall. They are 13-6 SU in the last 19 games at home against the Yankees.

After just finishing a sweep of the Oakland A’s, the Yankees have now won four straight and 16 of their last 20. It was just last weekend that the Yankees were no-hit by the Astros. Cristian Javier started the game and combined with two relievers to shut out New York 3-0. New York didn’t score for 16 straight innings until Aaron Judge’s walk-off homer gave the Yankees a 6-3 win in the final game of the series. The Yankees haven’t lost since.

The total has gone Under in four of New York’s last six games. Houston is one of the more profitable Under teams in MLB. The Astros O/U record for the season is 24-45-5.