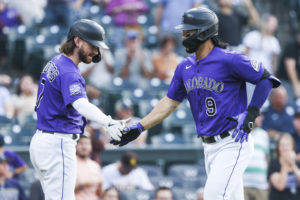 The San Diego Padres are 35-22 and just two games behind the Los Angeles Dodgers in the NL West Division. The Padres are interesting in that they got swept by St. Louis and then won series against Milwaukee and the New York Mets, both division leaders. The strength of the Padres, of course, is the team’s pitching. San Diego allows the fifth-fewest earned runs in the majors and tonight’s pitcher, Joe Musgrove, is one of the best in MLB.

Musgrove, who has the potential to be the NL’s All-Star game starter, is a perfect 6-0 with a 1.64 ERA which is fourth-best in the majors. In his last start, Musgrove tossed a gem. He allowed just one hit and no runs in a 7-0 shutout victory over Milwaukee. The Padres have won nine of Musgrove’s ten starts so far this season. He has a 19.4 percent strikeout-to-walk ratio and he is the ace of the San Diego staff.

Colorado will counter with Chad Kuhl who is a respectable 4-2 with a 3.17 ERA, which is solid for a Rockies pitcher who has to pitch in the hitter-friendly Coors Field when at home. Kuhl had two bad outings, both against San Francisco, in which he gave up five earned runs in each game. Since, he has pitched well allowing just three earned runs over three games and 16.2 innings. The Rockies have lost five of Kuhl’s last six starts.

Kuhl has historically had an issue with walks. His career walk rate is 10.1 percent and tonight he faces a team that is in the top ten in walk rate. Kuhl will have to face the likes of Manny Machado (.329) and Eric Hosmer (.294) who have helped the Padres win five of their last six games. San Diego is coming off back-to-back wins over the Mets in which they outscored New York by a combined 20-2.

The pitching mismatch goes even further when you compare the two teams’ bullpens. The Rockies bullpen ranks 29th in ERA (4.95) and 28th in Skills Interactive ERA (SIERA). The Padres rank 12th (3.79) and seventh in the same categories, respectively.

In addition to just one loss in their last six games, the Padres have done well against Colorado when they play the Rockies at home. Over the last 15 Rockies-Padres games played in San Diego, the Padres are 11-4 SU. Colorado has only won two of its last seven games and the Rockies have struggled on the road. They are now 5-15 SU in their last 20 road games. That’s been typical of Colorado, which went 26-54 on the road in 2021.

The total has gone Over in five of San Diego’s last seven games, but the Under is the trend at home and in games against Colorado. In the Padres’ last nine home games, six totals have gone Under. In the last ten games against the Rockies, seven have seen the total go Under.