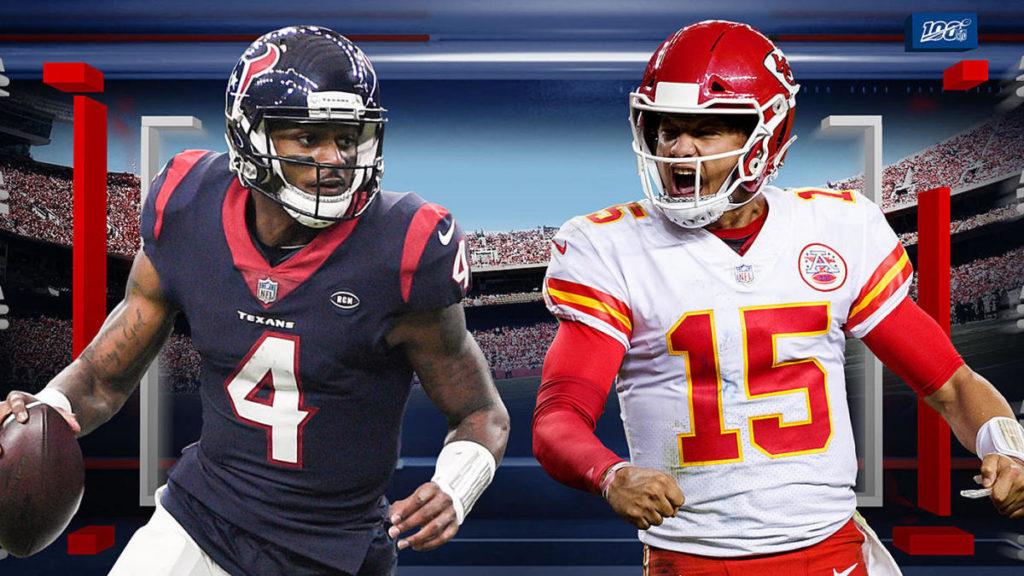 The one sports league that has, in essence, stood up to the coronavirus is the National Football League. The annual draft went on as scheduled in April although it was without fanfare and done virtually. Teams held virtual OTAs, or organized team activities in May and June and are now in preseason training camp.

Before long, it will be early September which means the NFL’s annual kickoff game will start the season. After a ho-hum defensive battle in last year’s kickoff game, the league decided that having the Super Bowl champion involved sells more tickets and adds more television viewers.

There may not be any fans in the seats, but plenty of fans will be watching on September 10 when the Chiefs host the Houston Texans. If the matchup sounds familiar, you’re absolutely right. The two teams met in the AFC Divisional Playoff, one of the 2019 season’s wackiest games.  Let’s see what the NFL odds say about this rematch.

In last year’s playoffs, Houston jumped out to a 21-0 lead and led 24-0 before Kansas City began one of the more impressive comebacks in recent NFL history. The Chiefs would score the next 41 points, including 28 in the second quarter alone. All 28 points came on touchdown passes from QB Patrick Mahomes.

Two Damien Williams rushing touchdowns gave Kansas City a 41-24 lead in the third quarter. It was a lead the Chiefs would never relinquish on their way to a 51-31 victory. Kansas City, as you know, then went on to win Super Bowl LIV.

Houston’s offseason can be summed up in three words: a complete mess. Somehow, head coach and general manager Bill O’Brien traded away one of the game’s best wide receivers – DeAndre Hopkins – for a couple of draft picks (not first-rounders) and a broken running back in David Johnson.

The good thing for the Texans is that they still have QB Deshaun Watson. Will Fuller V along with Randall Cobb and Brandin Cooks can step in and help Houston forget about the loss of Hopkins. Three-time NFL Defensive Player of the Year J.J. Watt should be back and healthy to lead the Houston defense.

Don’t forget, this is a Houston team that has won the past two AFC South titles and four of the last five.

With one of the league’s most explosive offenses led by the Super Bowl MVP (and former NFL MVP), the Chiefs opened as a 10-point favorite over Houston. Kansas City scored 28.2 points per game last season and quarterback Patrick Mahomes is the catalyst.

In two NFL seasons as a starter, Mahomes has completed nearly 66 percent of his passes for an average of 303.6 yards per game, and 76 touchdowns. He has won a Super Bowl, a Super Bowl MVP, a league MVP, and he has been selected to the Pro Bowl in each of his seasons.

The Chiefs return TE Travis Kelce, who led the team in receptions (97) and yards (1,229). They will also have a healthy Tyreek Hill who had 58 catches for 860 yards and seven touchdowns despite missing four games. Sammy Watkins (52 rec., 673 yds.) and Mecole Hardman (41-538) are also great targets.

Running back Damien Williams did announce he will opt out of the 2020 season, but the Chiefs drafted Clyde Edwards-Helaire with their first pick. Edwards-Helaire was selected because of his ability as a pass receiver as well as a runner.

History of the Kickoff Game

Four of the past five NFL kickoff games have been decided by a touchdown or less. Last year, it was Green Bay over Chicago 10-3 and in 2018 it was Philadelphia beating Atlanta 18-12.

The one outlier in the last four games came in 2017. The winner won by 15 points. It was quite an accomplishment since the team they beat was the New England Patriots. The team that won that game? It was the Chiefs, though they did have a different quarterback at the time.

NFL Odds: What Should Bettors Do?

The 10-point line might seem steep for some, but bettors are well aware of Kansas City’s performance in their last two season openers. With Mahomes at quarterback, the Chiefs beat Jacksonville last season 40-26 and beat the Chargers 38-28 in 2018. Both of those games were on the road.

Bettors should consider the other Chiefs-Texans matchup in 2019. Kansas City started last season 1-3 at home. One of the losses was to Houston. Watson outplayed Mahomes throwing for 280 yards and a touchdown and rushing for two more scores.

If you like Houston’s chances even without Hopkins on the outside, jump in now while the line stays at 10. If you’re leaning Chiefs, you might want to hold out and pick up a half or even full point as the line adjusts closer to game day.

Be sure to visit daily for free NFL odds and betting advice.