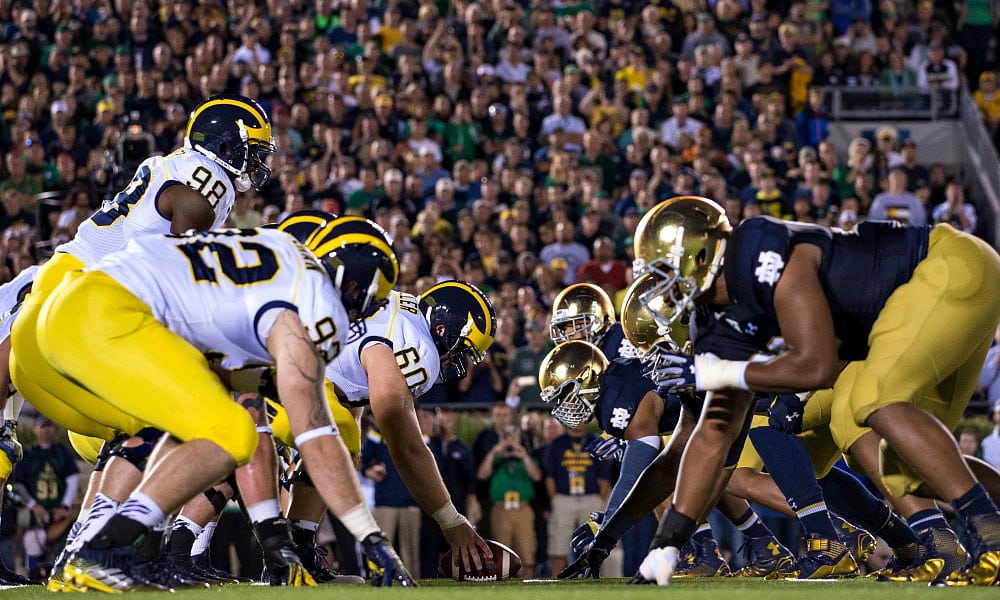 The Alabama Crimson Tide have been dominating college football in recent years, winning four of the last seven NCAA Championships. The only team to go back-to-back since the start of the BCS era in 1998, they are the odds-on favorite to repeat that feat, having won last season.

Who are the top challengers to dethrone Alabama? Here’s our top teams for the 2018 season dominated by the SEC and Big Ten conferences.

Despite the losses, the Crimson Tide should be strong defensively, with junior Mack Wilson and sophomore Dylan Moses ready to step up, along with pass rushers Raekwon Davis and Isaiah Buggs. Another underclassman to watch defensively is freshman cornerback Patrick Surtain, who could step in as a starter.

Offensively, Alabama will be lead by quarterback Tua Tagovailoa and senior running back Damien Harris. Tagovailoa should have a dynamic receiving group in Jerry Jeudy, Henry Ruggs and DeVonta Smith to throw to.

Clearly, the team to beat once again, Alabama is stacked offensively and if the young defensive plays up to potential, Alabama is without question a playoff team and favorite to win it all again come next January.

A perennial powerhouse, the Clemson Tigers prevented Alabama from winning three consecutive championships, defeating them in the title game two years ago. The Tigers lost linebacker Dorian O’Daniel and wide receivers Deon Cane and Ray-Ray McCloud in the NFL draft.

However, Clemson has been in the CFB Playoffs three consecutive seasons and have reached or surpassed 10 wins every season since 2011. Key defensive members Clelin Ferrell, Austin Bryant and Christian Wilkins opted to remain with the Tigers in attempts to dethrone Alabama and reclaim the national title.

Kendall Joseph is set to take over the linebacking core now that O’Daniel is in the NFL. The team appears to have plenty of depth across the board on the defensive side of the ball. Offensively, the group is young with freshman Trevor Lawrence expected to make a large contribution.

The running game should be a strength with Travis Etienne and Tavien Feaster, who rushed for a combined 1400 yards and 20 touchdowns, returning. They will be running behind a line that features three starters, including NFL prospect Mitch Hyatt.

Clemson will be tough on defense, but they will go as far as the young quarterback and running game takes them. Expect the Tigers to be in the mix come January with a shot in the CFB Playoffs.

The Georgia Bulldogs have not won a national championship since 1980, but the 2018 team is in an excellent position at the CFB playoffs and a shot at the title. They lost linebackers Roquan Smith and Lorenzo Carter, offensive lineman Isaiah Wynn, running backs Sony Michel and Nick Chubb and wide receiver Javon Wims in the NFL draft. Georgia remains a force defensively but will have to replace Smith.

Having had excellent recruiting classes, the Bulldogs have the up and coming talent to do so. Walter Grant and D’Andre Walker should give offensive linemen and quarterbacks nightmares and in the secondary, expect J.R. Reed and Deandre Baker to have standout seasons.

Replacing Michel and Chubb and their 2100 yards rushing and 26 touchdowns could be an issue, although D’Andre Smith and Elijah Holyfield look to step in nicely. If the offense can provide enough spark until the defensive unit fires on all cylinders, Georgia will be part of the CFB playoffs and perhaps surprise Alabama and Clemson for a national championship.

While their core skilled position players on offensive remain in place, holes need to be filled on the offensive line. Dwayne Haskins is set to take over as starting quarterback and while is not as mobile as past Ohio State signal callers, the ground game is set with J.K Dobbins.

Haskins has plenty of receivers to throw the ball to, led by K.J. Hill and his 55 catches last season. The biggest offensive question is on the line, which will be crucial to their long-term success.

Despite potential problems on the offense, Ohio State’s defense should be a top unit. Lead by Nick Bosa, Chase Young and tackle Dre’Mont Jones, the Buckeyes should wreak havoc on opponents passing game and be very stingy against the run.

While there is plenty of competition in the conference from the likes of Michigan, Michigan State, Penn State and Wisconsin, the path to the Big Ten title goes through Ohio State.

While Ohio State is the team to beat in the Big Ten, Michigan is a close second and could take down the Buckeyes. The Wolverines lost center Mason Cole and defensive tackle Maurice Hurst through the NFL draft but returns a large number of its starters.

The addition of quarterback Shea Patterson could be the difference. He has excellent mobility and a huge arm to get the ball to playmakers Donovan Peoples-Jones and Tarik Black. The ground game is the strength of the attack, lead by Karan Higdon and Chris Evans.

As the offense should be improved, there’s no question the Wolverines will go as far as their defense will take them. Their secondary headed by Lavert Hill and David Long as stingy, while Devin Bush and Rashan Gary look to cause numerous matchup problems for opposing offensive lines.

As is usually the case in the Big Ten, the schedule is daunting for Michigan, but coach Jim Harbaugh should have his team poised and up to the challenge. While they may fall short of the CFB playoffs, the Wolverines will make some noise this season in the conference and on the national level.

Let’s end this college football betting preview with the remaining teams in the top 10:

Rest of the Top Ten

We hope you enjoyed our first college football betting preview for the 2018-19 season!

Be sure to visit Oskeim Sports’ Blog throughout the summer months for additional college football betting previews and helpful betting advice.  If you are a college football sports bettor, don’t forget to check out Oskeim’s #1 Ranked College Football Season Subscription at the online store!