Can Anyone Overtake Aaron Rodgers for the NFL MVP? 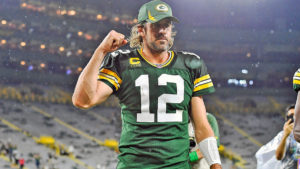 He won his third NFL MVP last season and is on his way to a fourth this season. Aaron Rodgers is the clear favorite to win a second consecutive MVP. He is listed -400 odds to win and appears to have a pretty safe lead in the race for the award.

There are a few contenders in the race. The question is with one week left in the regular season and the playoffs ahead, is there anyone that could surpass Rodgers and take the award away from him? The answer to that is a big “maybe.”

There are plenty of reasons why Aaron Rodgers wins his fourth NFL MVP this year. First off, he led the Packers to another 13-win season (with potential for 14), another NFC North Division title, and clinched the No. 1 seed in the NFC playoffs.

The Green Bay offense is among the best in the league. Rodgers has the highest touchdown-to-interception ratio of all NFL quarterbacks with at least 750 passing yards. He has 3,977 yards passing and 35 touchdowns and don’t forget, he missed a game due to COVID.

Rodgers has said he is planning on playing in the season finale against Detroit. Whether he does or not, he will lead Green Bay in the postseason and still has time to cement his hold on the award.

If there is anyone that could pull off the upset, it has to be Tampa Bay’s Tom Brady.  At 44 years of age, Brady has 4,990 yards passing and 40 touchdowns. He is the reason why the Bucs are 12-4 and NFC South champions.

Brady is given +500 odds to win the MVP, which makes it appear as though Rodgers has a firm grip on his fourth award. The Bucs play Carolina this Sunday. They just played the Panthers two weeks ago. Tampa Bay won 32-6 and Brady really didn’t need to do much. He finished 18-of-30 for 232 yards and a touchdown.

He probably won’t need to do much on Sunday either, but if he were to go off and have a career day he might pull himself closer to Rodgers. Then, of course, there is the playoffs make a final run at the MVP.

The only other realistic challenger to Rodgers in the MVP race is Cincinnati’s Joe Burrow, who just happens to be peaking at the right time. Prior to last week’s game against Kansas City, Burrow was seventh on the betting board at +3500.

After leading the Bengals to a dramatic 34-31 win over the Chiefs, Burrow now sits at No. 3 given +1000 odds to win. In his past two games, Burrow has put up video game-like numbers. Against the Chiefs, he completed 30-of-39 passes for 446 yards and four touchdowns. And that’s against the Chiefs who had won eight in a row prior to Sunday.

The previous week, Burrow lit it up against division rival Baltimore. Burrow set a franchise record with 525 yards passing. He also had another four touchdown passes. If he keeps this up, he could threaten Rodgers, especially if Cincy wins in the postseason.