Why Georgia Can Beat Alabama 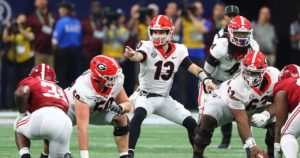 While there are many that don’t think so, the Bulldogs can beat their nemesis. Here’s how.

Sure, Alabama lit up Georgia for 41 points in the SEC title game. That said, the Bulldogs still lead the nation in scoring defense. UGA gave up 9.6 points per game this season. Alabama was the only team to score more than 17 points against the Bulldogs.

This is a defense full of stars and it allows opponents an average of just 4.01 yards per play. That’s No. 2 in the nation just behind Wisconsin. UGA head coach Kirby Smart is a defensive guy and his unit will play better the second time around.

If you want to win championships, you have to run the football. The Georgia offensive line has paved the way for Georgia running backs to gain 5.3 yards per carry. That will move the chains and score points. The Tide did hold Georgia to just 109 rushing yards in the conference championship, but there was a point where the Bulldogs had to abandon their efforts at running the ball. The Georgia offensive line also allowed the fewest sacks in the SEC. That will allow QB Stetson Bennett to do what he does best.

Speaking of Bennett, he was completely in control in the national semifinal win over Michigan. He completed 21 passes for 310 yards and three touchdowns. J.T. Daniels, who began the season as Georgia’s starter, is healthy but Smart has decided to stick with Bennett. It’s been a good decision. He did throw three picks against the Tide in the title game, but he was also 29-of-48 for 340 yards and three touchdowns.

For all the talk of Alabama’s skill players, what about Georgia’s? They have three quality running backs. Zamir White is the team’s leading rusher with 772 yards. James Cook has 651 rushing yards and is a valuable piece of the passing game. He has 24 receptions and four of them have gone for touchdowns. Kenny McIntosh is the third back and has 324 yards this season.

TE Brock Bowers is a future star. He leads the Bulldogs with 53 receptions, 859 yards and 12 touchdowns. Georgia has a number of talented receivers too, but the best of the lot, George Pickens, will be back. Pickens tore an ACL in the spring and has worked his way back. He caught two passes in the SEC championship and should play a bigger role in Monday night’s game.

Georgia hasn’t beaten Alabama since a guy named Matthew Stafford was the Bulldogs quarterback. Smart is 0-4 against his former boss, Alabama head coach Nick Saban. To get his first win over Saban, Smart needs to take a lesson from the previous two games against the Tide.

When the teams played last year, Georgia led 24-20 at halftime. The Bulldogs failed to move the football early in the second half, allowed Alabama to gain momentum and ultimately lost 41-24. In this year’s game, Georgia led 10-0 in the first half. After the Tide scored on a long touchdown drive, the Bulldogs went cold. They punted on their next two possessions and that was it. If Georgia can avoid those mini-slumps, they can finally beat Alabama.