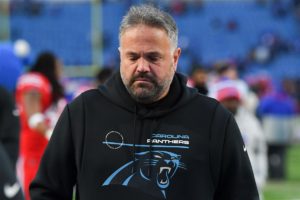 Losing your first game of the season is never a good sign for an NFL team or its head coach. In today’s “win now or else” world, the majority of team owners and general managers lack the patience necessary to continue working with their head coach if their team continues to underperform. Fans don’t like it either.

After the first two weeks of the 2022 NFL season, there are already three head coaches who appear to be on the chopping block. If their respective teams’ performances do not improve, any one of the three – or even all three – could find themselves without a job by season’s end.

Rhule has been dealt a difficult hand in Carolina. He has yet to have an elite-level quarterback. Trading for Baker Mayfield was supposed to give Rhule and the Panthers a boost in that department. So far, it has not.

The Panthers’ offense once again looked awful in a 19-16 loss to the New York Giants on Sunday. Mayfield went 14-of-29 for 145 yards and a touchdown. Those are hardly impressive numbers. What’s also unimpressive is Rhule’s 10-25 record in Carolina.

Defense hasn’t been a problem for the Panthers, but at 0-2 defense isn’t winning any games. Carolina moves into a stretch where they play four of the team’s next five games against teams that went to the playoffs last year. Rhule might not make it past October if things don’t improve.

Who would have thought the Colts would be winless after two games in 2022? Indy traded for QB Matt Ryan and they have the returning NFL rushing leader in RB Jonathan Taylor. Add in one of the better offensive lines and defenses in the league and the Colts appeared to have a recipe for a potential Super Bowl run.

Somehow, the Colts managed a tie with lowly Houston in Week 1 and then got smoked 24-0 by Jacksonville in Week 2. Now, Reich’s job is on the line after the Colts offense managed just 218 yards last week against a Jags team that went 3-14 last year. Taylor had nine carries in the game.

The next three weeks will speak volumes as to how the Colts respond. Indy will faced Kansas City, Tennessee, and Denver. Reich and the Colts need to turn it around or Indianapolis might be in the market for a new head coach.

Hackett will probably get a free pass to next season since this is his first in Denver. It’s also his first as a head coach at any level. One would think that an NFL head coach would have an understanding of how to work the clock. Hackett apparently does not.

The Broncos are 1-1 and haven’t really played that well, but it’s a few of Hackett’s decisions that have left NFL fans as a whole scratching their heads. Hackett’s blunders in clock management cost the Broncos an opportunity to beat Seattle in the season opener.