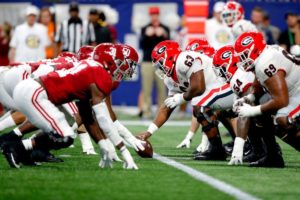 There are billions of statistics available for the college football bettor. No matter how much you study about Total QBR, Expected Points Added, and Sack Yardage Lost, you can still struggle. Modern sports bettors are not only addicted to numbers, but also the creative use of those numbers.

What if you could enhance your chances of beating the house and make money betting on college football by using just two numbers?

Against the Spread Trends

It can’t be that easy, can it? Any sports bettor can easily find numbers against the spread. Many CFB bettors might even memorize teams’ ATS records. You can use this information to assist you to become a successful CFB bettor if you can understand history as well as current ATS performance trends. Consider the story at Alabama.

The Crimson Tide are without a doubt the best college football team over the past ten or so years. Alabama is 183-25 SU under Saban. Even more remarkable is Saban’s Tide’s 117-93-2 ATS record. For those keeping track, that is a winning percentage of 55.7%.

What’s really intriguing is that Saban’s teams frequently faced double-digit spreads to contend with every single week. Even in SEC matchups, Alabama is frequently favored by three or four touchdowns in the era of the College Football Playoff. Alabama has won 56 of the 61 games straight up and is 36-24-1 ATS (60%) since the start of the 2018 season.

If you want to be a successful CFB bettor, there are other coaches to keep an eye on besides Saban. Jimbo Fisher, the head coach at Texas A&M, is a disciple of Saban’s. Fisher has a current ATS record of 31-22 (58.5%) in more than four seasons with the Aggies. In the 2021 season, Alabama was the target of one of those victories.

Bill Snyder of Kansas State was one of the greatest collegiate football coaches of all time. Snyder led the Wildcats program for 27 seasons (two separate tenures), winning 215 games. His ATS record is legendary having covered over 65 percent of the time.

What’s astounding is that Snyder accomplished this while leading a team that ranks eighth all-time in college football losses. Even more astounding is the fact that Chris Klieman, the head coach at Kansas State at the moment, has maintained Snyder’s record. Klieman takes over as head coach of the Wildcats in 2019, and he is 26-17-1 ATS with a 65 percent winning rate. In that period, only two schools have performed better. Since 2019, Minnesota is 23-12-3 ATS while Oklahoma State is 28-13-1 ATS.

What makes these teams capable of covering so frequently? Like Snyder, Saban, and Fisher, Mike Gundy at Oklahoma State and P.J. Fleck at Minnesota rely on two fairly straightforward ways to win games: play excellent defense and run the football. Consider coaches with similar philosophies if you want to become a successful CFB bettor.

Can you really just place your college football wagers by consulting the most recent AP Top 25 poll? Know, however, if you choose a certain segment of the top 25 ranks, you will discover a tactic that is worthwhile to try.

Remember, the media produces the AP Top 25. They can usually get the top eight to ten teams right, but the rest…not so much. They will rank popular teams from bigger markets ahead of teams that probably deserve the ranking. Therein lies the value.

You should also keep in mind that you will almost always bet on underdogs. For instance, last week, underdog Georgia Tech defeated Pittsburgh 26-21. If a bettor had simply used this approach, a $100 wager on the Yellow Jackets would have returned $1100!

There are surely other ways to become a successful college football bettor. However, using ATS numbers and the Top 25 are two statistics that can help any bettor increase their college football winning percentage and, more importantly, their bankroll.