MLB Playoffs Get Underway with Possibility of Subway Series 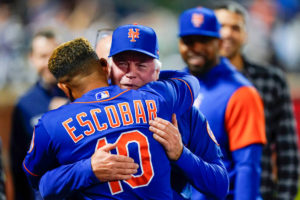 It seems like forever. Twenty-two years ago, the New York Yankees beat the New York Mets 4-1 to win the World Series. Is it possible that we will be treated to another Subway Series in 2022? So far, the betting public seems to think so, or at least that’s what they would love to see.

The two New York teams are the biggest liabilities in the World Series futures market for many sportsbooks. The Mets and Yankees are getting the most action in their respective pennant races as well.

The overall betting World Series betting favorite is the Los Angeles Dodgers. At +300, the Dodgers have amassed 12.3 percent of the tickets and 16.0 percent of the betting handle. Los Angeles finished with the best record (111-51) in baseball. It was their fourth 104-plus-win season in the past six years. The Dodgers won the NL West for the ninth time in the past ten seasons.

On the betting board after the Dodgers are the Astros at +400 and the defending World Series champion Braves at +500. Despite being the reigning champion and winning their fifth NL East title in a row, Atlanta has taken in between 7 and 8 percent of the World Series tickets.

In the respective pennant markets, the Yankees are listed at +210 and have received more than 20 percent of the wagers. Houston is the favorite at +160. In the National League, it’s the same story. The Mets have 19.5 percent of the tickets and over 20 percent of the handle. The Dodgers are favored to win the NL at +140. Atlanta is given +225 odds and the Mets are third on the board at +400.

Fans would love to see another Subway Series. Historically, it has happened more often than the average fan knows. Most of them occurred before 1962, the year the Mets franchise was founded. Before 1962, the Giants were located in New York and the Dodgers were in Brooklyn. The two teams played 13 times in the World Series between 1921 and 1956. The Yankees won all but three of them.

After that run, the so-called Subway Series didn’t happen again until 2000. The Mets, who led the NL East for most of the 2022 regular season, haven’t been to the playoffs since 2015. They are forced to battle through a wild card series against San Diego. The Mets had a 10.5-game lead in the NL East, but Atlanta came back to overtake New York and win the division.

The Yankees have been to every postseason since 2017. They have not been to a World Series since beating Philadelphia in 2009. The Yankees advanced to the ALCS in 2017 and 2019 only to be beaten by Houston both times.