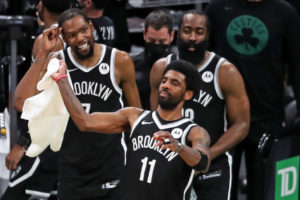 The NBA season is well underway and the league is celebrating its 75th anniversary in style. With so many exciting players and teams in the fold, it’s hard to find out who the best teams are to bet on.

Which teams can get you the best payouts each night? And which ones are safe bets for the championship?

That’s what we’re here to look at today. Read on to find out more about which NBA teams are the top teams to bet on in 2022.

We start with the Brooklyn Nets. In a list of NBA teams that get a lot of media, the Nets seem to be getting both good and bad press.

While the team figures itself out with an injury to Kevin Durant and with Kyrie Irving being available for some visiting games, the talent is hard to ignore. They’re easy to bet on night in and night out from talent alone.

While there are questions looming about the future of the Nets this season, betting on the Nets to win most matchups is seen as a safe move.

The Warriors started off the season hot and have since cooled down relative to their standards. Draymond Green, their glue guy, is injured and the defense is struggling a little because of it.

But what makes them a great team to bet on regardless? Two words: Stephen Curry. With Klay Thompson back in the mix, they’re often favored to win against inferior teams. They even put up great fights against contenders.

While their championship hopes probably rest with Green’s recovery, we’d say betting on the Dubs is generally a good move.

Let’s not forget about the defending champs here. They’re quietly (or maybe not so quietly) maintaining their elite status in the Eastern Conference. Giannis Antetokoumpo might just win another MVP this season!

While Brook Lopez is still out and guys like P.J. Tucker have moved on, their core still remains intact. They aren’t a lock for the Finals just yet, but betting on the Bucks still remains a great move even after their championship run.

People are always criticizing the Jazz for their early playoff disappointments the past few years. That shouldn’t stop you from putting money on them night in and night out though.

Their wicked fast offense is one of the best in the league and outmatches pretty much everyone besides a few contenders in the NBA. Combined with their excellent defense, the Jazz is an excellent betting pick for most nights.

The Phoenix Suns are showing this season that they aren’t going anywhere. While they’ve had some injuries to guys like Deandre Ayton, they’re still an elite Western Conference team.

Chris Paul is a little older, sure, but he’s still arguably an All-Star. Devin Booker plays lights-out offense many nights, and guys like Mikal Bridges keep the entire team afloat.

The Suns might not be the flashiest team out there, but they made it to the Finals for a reason. As such, they remain a great team to bet on during the 2022 regular season.

Betting on the Best NBA Teams

The 82-game schedule in the NBA makes it hard to know who really is the best team to bet on. Use this guide to help you understand which NBA teams are safe bets this season.

Looking for sports picks and previews? Check out the rest of our site or contact us today to get the best possible bets!