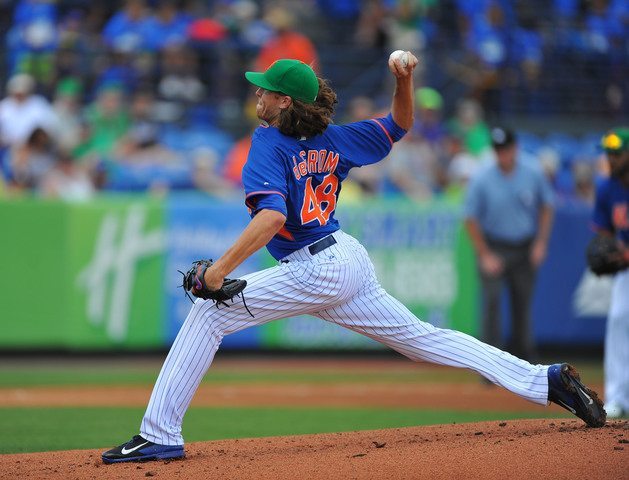 New York right-hander Jacob deGrom is coming off an outstanding 2014 Major League Baseball campaign wherein he was 9-6 with a 2.69 ERA and 1.14 WHIP over 140.1 innings of work. More importantly, those solid peripheral numbers were supported by underlying metrics:

The 26-year-old was nearly unhittable at home last season where he was 5-3 with a 1.70 ERA and 0.99 WHIP in ten starts. After recovering from Tommy John surgery early in his career, deGrom has added three pitches to his arsenal, all of which contributed to his 11.7% swinging strike rate last season (8th best in the league among pitchers that threw at least 140 innings).

The newly-refined pitches include a changeup with Johan Santana’s grip, a curveball with Fran Viola’s grip and a fast slider developed under the guidance of pitching coach Dan Warthen.

Meanwhile, Miami starter Mat Latos didn’t make his first start in 2014 until mid-June, and red flags were evident from the outset. Latos experienced a steep drop in his fastball velocity, which was down about two miles per hour. The drop in velocity manifested itself in a strikeout rate that was 3.5-4% lower than his career average.

While Latos was successful in keeping the ball on the ground last year, his results in 2015 could be disastrous if his home run per fly ball rate regresses back to his norm. Latos is/was a major regression candidate entering the 2015 campaign, and the concerning shift in batted ball mix leaves little optimism for the 27-year-old hurler.

From a technical standpoint, Miami is a money-burning 3-14 versus teams with a winning record, 2-8 in its last ten games versus National League East foes and 3-10 in its last thirteen games overall. The Marlins are also 3-10 in the last thirteen meetings in this series, including 2-7 in New York.

In contrast, New York is a profitable 7-0 at home versus right-handed starters, 7-0 in its last seven home games, 21-8 as a favorite (35-17 as a home favorite) and 10-4 in deGrom’s last fourteen starts (6-1 L/7 at home). With New York standing at 6-0 in its last six games versus NL East opposition, take the Mets in this Major League Baseball affair and invest with confidence.