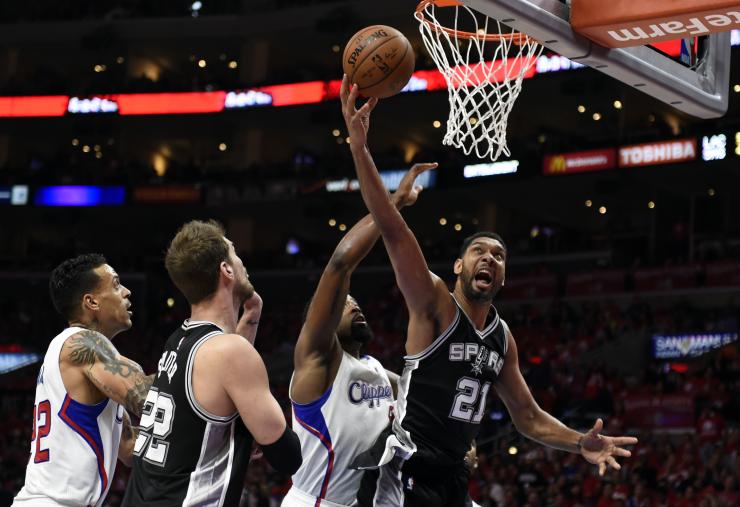 The underdog is 10-3 ATS in the last thirteen meetings in this series, and I fully expect the Spurs to improve upon that mark tonight against an overrated Los Angeles squad that is 16-25 ATS at home and 30-35 ATS as a favorite this season. The Clippers are also a money-burning 9-20 ATS at home following three or more consecutive wins and 28-47 ATS off two or more consecutive ATS wins. Conversely, San Antonio is a profitable 4-1 ATS in its last five games off a loss and 8-2 ATS after yielding 100 or more points in its previous game.

The concern, of course, is at the defensive end of the floor where the Spurs gave up 107 points on 51.3% shooting in Game 1. “Can’t fix making shots, but we can definitely play defense better,” Danny Green said. San Antonio is 3.4 points per game better than average defensively (97.1 points per game to teams that would combine to average 100.5 points per game) so I don’t expect the Clippers to match their productivity from Game 1. I also like the fact that the Spurs are limiting opponents to a mere 96.4 points per game on the road this season.

It seems as if a lot of people are overreacting to San Antonio’s Game 1 loss on Sunday, but the Spurs also lost their first playoff game in 2003, 2005 and 2007 before ultimately winning the championship in each of those seasons. Variance played a significant role in the Spurs loss in Game 1 as they finished 14-of-26 at the free-throw line and 10-of-33 from beyond the arc.

I also expect head coach Gregg Popovich to address San Antonio’s woeful transition defense exhibited in Game 1. The Clippers posted a 23-12 advantage in fast break points, which was caused, in part, by the Spurs’ insistence on challenging Los Angeles in the backcourt.

Finally, San Antonio applies to a very good 51-13-2 ATS NBA playoffs bounce-back situation of mine that invests on certain underdogs off a blowout loss. Grab the points with the Spurs in Game 2 of the NBA Playoffs and invest with confidence.